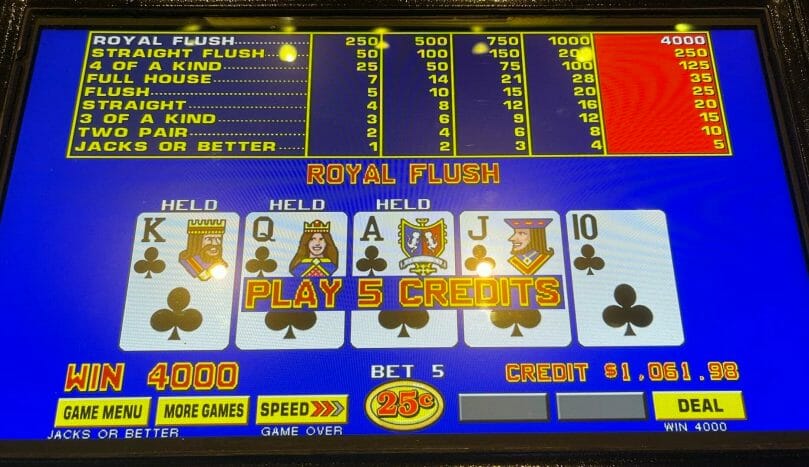 I received a really good question in my inbox recently from a reader hoping to wrap his arms around how video poker works vs. slots. The question asked:

I have been told that once you place a bet for a slot machine and either pull the lever or push the button that there is nothing you can do the effect the outcome. The reels are just for entertainment because the outcome had already been determined. Does this apply to video poker machine?

I ask because I can understand a ‘random generator’ creates the original poker hand. But does how one selects which cards to use affect the outcome?

I offer the following situation to explain my question. If the original poker hand is two Jacks and two ‘3 cards’ with another off card; I can either select:

1. two Jacks and two ‘3 cards’ and hope for a full house; two pairs is a small winning hand

Video Poker, in nearly every case, works differently than a slot because you have some factor in the outcome of the game, in that you can choose which cards to discard.

If you make a mistake or a non-optimal decision, that would over time have an impact on your payouts. In that way it’s much closer to Blackjack – perfect play will get you optimal payback over time.

Because a deck of cards has a finite number of outcomes, other people much smarter than I have generated video poker strategy tables based on the type of video poker game you’re playing (which there are many), and the pay table (as sometimes how much you get paid for each outcome can impact the best decision for a hand).

There’s also apps like “Best Hold,” which is developed by a team that is from the same company that develops many of the video poker variations out there, that can also let you input a starting hand and it will tell you, based on that and the game/pay table, what you should hold and throw away for optimal play.

So in short, yes, depending on the game you’re playing, picking the right cards to hold off the hand in your example could differ, and therefore it’s important to know the strategy of the game, as your choices most definitely impact the outcome over time.