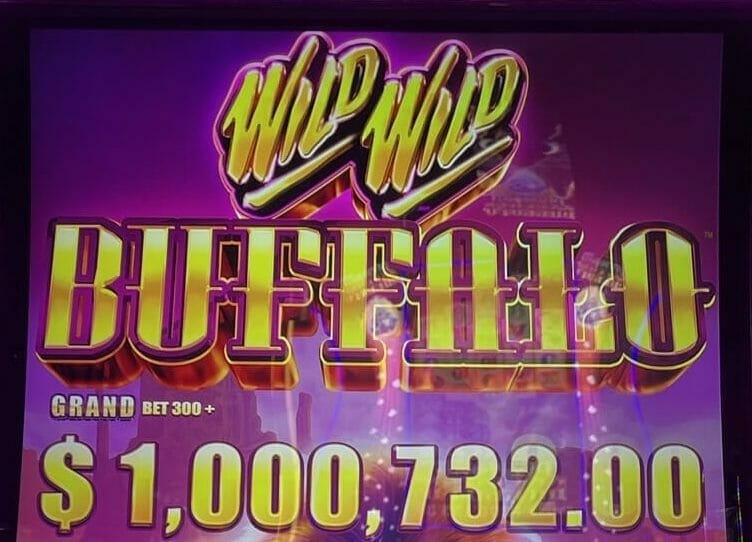 Aristocrat hasn’t been shy about introducing new Buffalo brand extensions as of late – the space has been full of recent examples like Buffalo Chief and Buffalo Link.

They also haven’t been shy with mixing and matching elements to suit their purpose, such as Buffalo Link, which effectively overlaid Buffalo onto a hold and spin format game.

This brings us to Wild Wild Buffalo, which mixes and matches elements of games like Buffalo Grand and the broader Buffalo theming with the Wild Wild series, which has been a hit in recent years for the slot machine maker.

Compared to the original Wild Wild series of games, Wild Wild Buffalo bumps the bet increments to 75 credits from 50 credits. Like Buffalo Grand, you must bet at least $3 to be eligible for the grand progressive, which is a wide-area progressive.

The flip side to the bet level increment is a larger amount of ways to win. The earlier Wild Wilds had a baseline of a 5×3 reel set with 243 ways to win, while Wild Wild Buffalo is a 3-3-4-4-4 with 576 ways to win. So the increased bet increment in part contributes to that arrangement.

The credit prizes on the buffalo heads get bigger as you get farther to the right on the reels, for the simple reason that they’re harder to reach.

Three or more Wheel symbols trigger the bonus. The bonus starts with a jackpot feature, which is carried forward from the game Buffalo Grand. First, you spin the top wheel, which can award a progressive, multiplied progressive or free games. The number of free games possible on the wheel is based on the number of scatters:

Any spins that yield a progressive will deliver another spin on the jackpot feature wheel. Any spin that delivers free games will instantly begin the free games, with the number of games landed being the starting count.

When the wilds land on reels 1 and 2, they will now multiply by 2 or 3, traditional for both Wild Wild and Buffalo. The two Wilds on reels 1 and 2 act identically to the base game, other than now credit prizes and line hits are multiplied.

The game is a toughie, which isn’t unusual for Buffalo games, but given the heritage of each game having some toughness, the two combined, like Buffalo Link, can make for a really tough game, albeit one with potential to pay big when the right conditions align.

Slotaholic did a 100 Spins video on Wild Wild Buffalo:

Shinobi Slots includes a bonus in this video of the game: