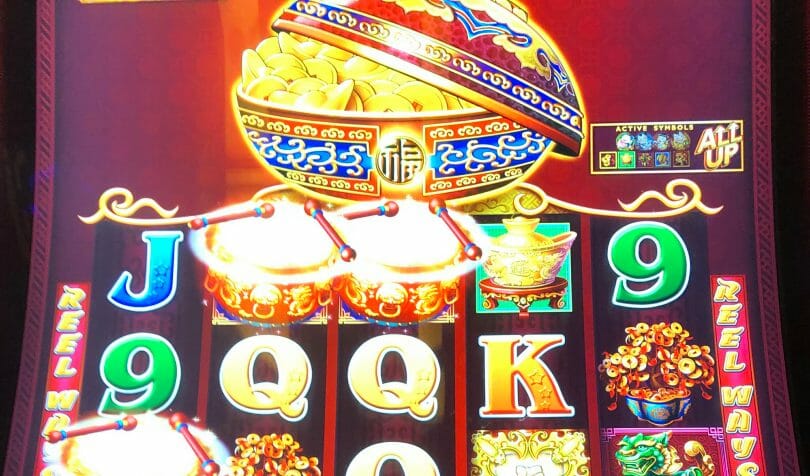 Let’s start diving into some of the myths around progressives. A popular one relates to the Asian-themed games with 88 cent bets, which show meters, pots, fireworks, etc. filling as certain symbols that could trigger a progressive are landed, with the chance of hitting a progressive.

Over time, as it’s been longer and longer without a progressive win, the pots, fireworks, etc. get fuller and eventually look like they’re ready to burst. So that means a progressive is near, right?

Status: The chances of winning a progressive are the same on every spin, assuming the same bet.

Games like 88 Fortunes, Dancing Drums, Da Ji Da Li and Fu Dao Le all have progressives that can be triggered randomly. Each has a symbol that pops up, which is the trigger chance. Whenever that symbol appears, they send something up to the pot, fireworks, etc. and either they explode or not.

As the game goes longer without a progressive being triggered, the meters get fuller. For the player, it can indicate how long it’s been since a progressive has been won. However, because Vegas-style slot machines use a Random Number Generator (RNG) to determine the outcome of a spin, and previous spins have no impact on the outcome of the next spin, those meters are functionally useless.

However, slot designers know it has a psychological impact on players. Many players will viscerally react to the full-looking meters and chase the progressives, thinking it must be ‘due’ to hit. What they’re doing is getting you to expose more money to the house edge, which will inevitably over time take more than it’s paying you out, progressives included.

What Matters for the Progressives

Games designed in this math model do have a few things that are worth caring about:

So while it doesn’t matter how long between progressive wins a machine is experiencing, there’s always ways to play smarter.

Have you taken a big progressive away from someone because they were moving too slowly? Share your experiences in the comments!