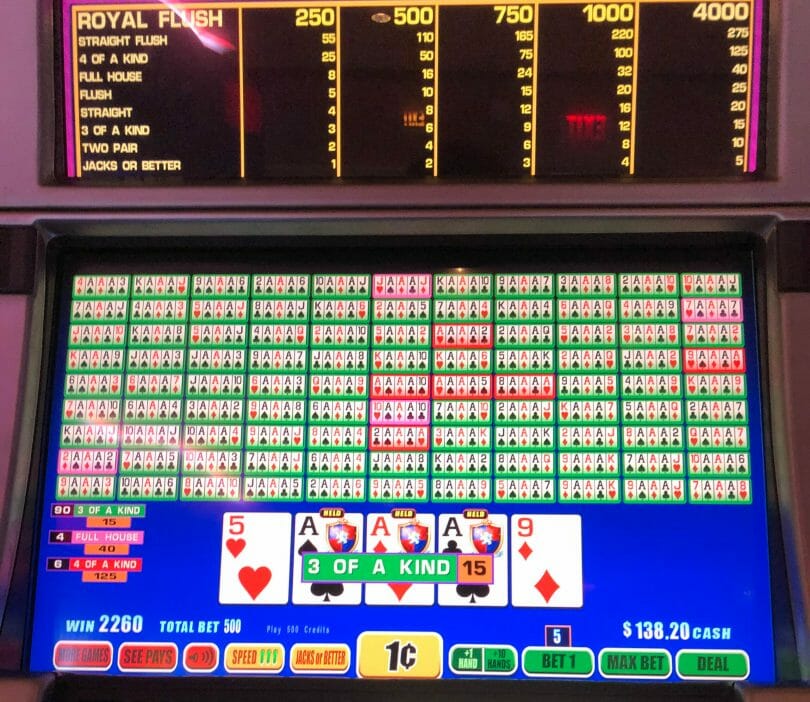 In a recent post I shared some basic notes about Video Poker paytables and how to get started. In today’s post, in lieu of a potential Advantage Play slot, I want to talk about a more specific aspect of analyzing video poker pay tables, and something some Advantage Players have done since video poker has grown in popularity: Finding misprogrammed machines.

As mentioned before, Video Poker is the unusual scenario where its payback percentage is worn on its sleeve – you can review the paytable and, thanks to people smarter than myself who have already crunched the numbers, know what the game will pay over time.

I like to play multi-hand video poker more often than not, and I’m not afraid to sit down at machines with 25, 50 or even 100 hands going at a time. For me, the playing out of 100 hands at a time is a good way to further smooth out volatility, especially when I’m doing things like point chasing opportunities.

However, twice in recent months, I’ve tripped across machines in two different casinos, both owned by larger chains with somewhat predictable video poker scenarios in a general sense, that had paytables that paid 2-3 % above the expected average for the specific game, denomination and hand count I sat down to play.

Why would this be the case? There may be a couple of reasons for this:

In the case of these two particular machines, I’ve played the same game, in a different casino owned by the same company, and they had more expected paytables activated. So I’m leaning more towards the human error factor.

It may not seem easy or obvious to find these errors, but they’re out there. The more publicly they’re identified and promoted, the more quickly a casino will likely realize they’ve made a mistake and review everything. After all, it’s not likely that a game would suddenly have a spike in activity unless something was discovered by players. And if the overall payback is deviating in any meaningful way from what it should be paying, more play would bear that out on the long term chart as well.

If you’re looking for these opportunities, here’s a few things to keep in mind about these mistakes and why really getting to know the machines each casino has is important:

The reality is, a casual player occasionally putting $20 or even $100 into a video poker machine may not see enough of a difference to search too hard, because the difference in expected loss between one pay table and another may be too narrow to overcome the short term variance of a game. But if you’re going to be a regular player of video poker, it helps to become more knowledgeable.

So what can you do?

Good luck out there!