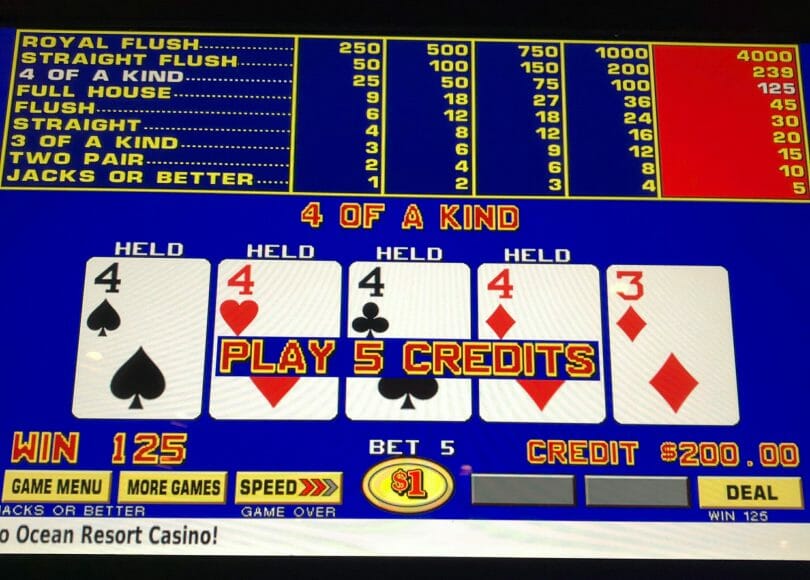 Even though my primary focus is on slots, I get questions periodically around video poker. Some hear that video poker pays better, while others like the fact that their own choices can positively impact their performance.

While I don’t expect to be diving into deep video poker stategy anytime soon, there are times where it matters to readers of this site. For instance, I mentioned that you can use video poker paytables as a hint at how tight or loose the casino’s paybacks are overall. There’s also the occasional video poker game that offers an Advantage Play opportunity, such as Ultimate X.

But today I even want to take a step further back than that. Some slot players want to understand how video poker works, and whether they should add that into the mix. Today I’ll cover the key points from the viewpoint of someone who may be getting started.

Step 1: Learn the Game, or Games

The first thing I want to remind slot players is that Video Poker has a skill component. Because the game (at least in markets like Las Vegas, and not in markets like New York racinos) is based on a real deck of cards, and there’s mathematically only so many ways cards are dealt, smarter people than most of us have already figured out what the best play for each hand will be.

As such, the better you play to strategy, the better your payback expectation, just like other card games like Blackjack. There are apps and websites such as VideoPoker.com that have training modes and ways to practice – even longtime pros like Bob Dancer recommend periodic tune-ups on your training to make sure mistakes don’t creep into your play.

One thing to understand is that there’s dozens of Video Poker variations on the market today. Each have their own level of volatility, pay tables, and strategies. Some games may have very similar strategies to each other, but many have differences, and sometimes those differences can even be within the same game, with different pay tables.

So if you’re new to Video Poker, you should focus in on a single game. If you want the easiest strategy to learn with a low volatility, you can’t go worse than the classic Jacks or Better. Jacks or Better has no special wild cards and a simple strategy to get familiar with.

Strategies for all the main Video Poker types are on the Internet and publicly available; I recommend checking out Michael Shackleford’s website, The Wizard of Odds, which is a rich repository of information. Not only is there optimal strategy strategies, but there’s streamlined ones that won’t cost you much in return but can be much easier to get up and running.

While you’re still getting acclimated with the game, you may want to check yourself. VideoPoker.com has a mobile app called “Video Poker Best Hold,” which lets you select which game version you’re playing, which pay table, and the cards you’re showing to determine which cards you should keep and discard.

In Video Poker, the game is unusual because, since a traditional Video Poker terminal is based on a true deck of cards, and the pays for each hand achieved is shown on the terminal (just like the pay tables of any slot is shown), you can actually determine what your expected long term payback of a machine will be.

For most games, you look at the full house and flush payouts – most often pay table adjustments are based on those two mid-level hand values. Occasionally you have to look beyond those, but any strategy sites, like The Wizard of Odds mentioned above, will tell you this in the posted strategies. Or for a quick table look, see the various Video Poker pay table payout levels based on the pay table settings by scrolling down on this page.

When you go to Las Vegas, you’ll likely see at properties owned by the two big companies, Mlife and Caesars, 7/5 Jacks or Better at quarters on many machines, which will pay about 96.15% over time, more than 3% less than full pay Jacks or Better. That’s more than $3 more of expected loss for every $100 wagered, in the long term. It’s still much better than slots, but it’s also still more costly.

As such, knowing how to read pay tables, and be able to analyze the relative value of each machine available to you is important. In a piece coming up I’ll dive into this aspect in more detail, but if you want to get acclimated with where to find good Video Poker pay tables, you can start by checking out your local casinos on vpFREE2.

Bartop video poker is traditionally a bit weaker in pays, since the location is considered more advantageous with easy access to beverages (including comped drinks in establishments that allow for this). It’s also usually considered ideal as you may have access to other amenities such as food, TV with sports games on and so forth.

There are also scenarios where casinos will offer better conditions, but will adjust the comps accordingly. At the Cromwell in Las Vegas, 9/6 Jacks or Better exists at a quarter denomination, which is highly unusual for the strip, but your comps are earned at a level of $50 per point (a point giving you one cent of comps and one tier credit). You will not earn much of anything playing on that.

At Mohegan Sun in Connecticut, they also have full pay Jacks or Better at quarters, and both they and Foxwoods have it at the $1 level and above. But the tradeoff is you do not earn comps, and the tier credit points earning is very sluggish.

If comps doesn’t matter, the game conditions are clearly better and should be where you place your energy, but some players value comps as a part of the package, and if so you can look for another location that balances it better. In the Cromwell example, you might go off strip or to a locals casino like Emerald Island.

The more you are able to do your homework, the more likely a venture into Video Poker will be successful. Unlike slots, where you don’t often need to know what you are doing (although as my site hopefully shows, you should still understand the games you’re playing), with Video Poker it goes beyond basics to actually knowing how to play the game to ensure best results.

You should train before going into a casino, and you should practice occasionally to make sure your skills are continually sharpened.

And, if that’s your goal, you should also understand the pay tables to make sure you’re getting the best opportunity for your gambling dollar. You should know the general layout of the casinos you visit most often in particular, so you aren’t simply leaving money on the table because you didn’t realize a better game was across the building.