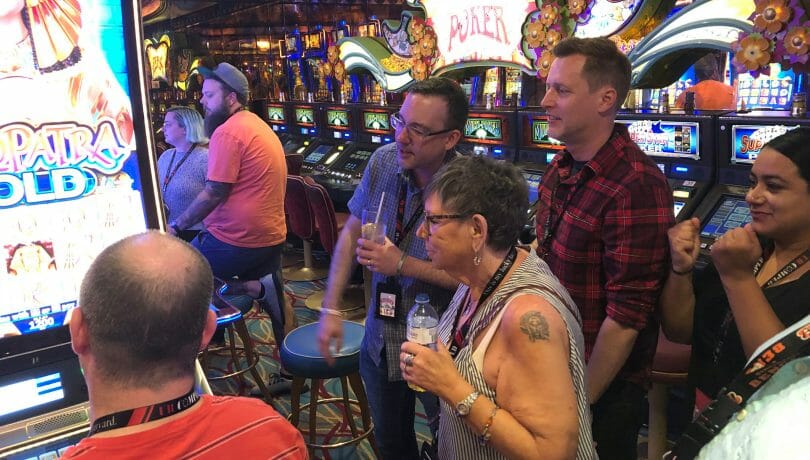 On a recent blog post, Brian Christopher spoke about the statistics of his first 100 group pulls posted to his channel. Because of the scheduling and circumstances behind them, I’ve been part of a handful of those, and more often than not have had good results.

I previously wrote about group pulls on the site, but figured I’d share my personal experiences around them. They’ve taken a few forms, each of which having its own value during my casino trips, and may inspire some of you.

First off, a reminder about what group pulls are – in essence, it’s when multiple people pool an agreed upon contribution per person together, and play together on a single slot machine. Usually this is with the goal of betting higher than any individual would on their own, or taking a chance at a higher limit game (and sometimes both).

My group pull experiences have come in a few flavors:

Organized Group Pulls by Others

For me this is most often one organized by Brian Christopher, who has held events that I’ve been at a number of times over the past few years. The most recent group pull is in the video above, and in it I got the largest hit of the group.

This isn’t a fluke – at least three other group pulls I’ve been in the past 15 months have been this way. They aren’t all winners, but I’ve had unusually good luck in these group pulls.

I tend to find these fun because I know what the most I’m putting at risk will be (most often the number is $200, but higher value group pulls are scheduled by people), there’s usually a sizable group (up to 20 at times), and it’s an enthusiastic group.

One thing that’s nice about the structure used by Brian and others is that all betters play through the money they contributed once, and then what’s in the machine at the end of that cycle is distributed. That means nearly universally no one goes away empty handed (that would be a pretty remarkable scenario if so).

Sometimes there are people in the group pulls that I know from the community; other times I get to meet people I’ve interacted with but never have met in person. I find the social aspect of it and the group vibe doing these group pulls to be fun.

Around the time I launched this site, I conducted a two group pulls, which were fun to do in their own way. In the case of each of them, they were $100 group pulls, with a 20 person cap. We came close to the cap on both.

With a smaller dollar amount than the slot channel group pulls, we did pick a bit less aggressive betting amount ($10 a spin vs. $20, to ensure each player got a reasonable number of spins), but we did pick volatile games like Lightning Link and Mighty Cash.

Like the Brian group pulls, with groups that size it was a fun shared experience that provided a fun social outing for all involved.

I didn’t film them as that wasn’t the goal, but both ended up almost being at half lost before rebounding nicely – in both cases we all agreed to play up or down to the next amount, and got bonuses that jumped us up the list.

As such, the rules that were set were a bit looser – everyone played through once, and then we decided how to proceed, hence the play up or down to an even interval. In both cases, the playing up/down worked to our advantage.

In this scenario I pool my money with one or more other friends with the goal of playing a slot together and hopefully winning together. It’s actually in this format that I’ve had one of my most successful slot moments ever – during my spins, I managed a $2,000 hit on Bonus Times on a $3 bet, the first time I’ve ever hit a handpay.

On my first ever cruise, a number of us that were there together would do mini group pulls each night, usually $20 or $50 each to play a higher limit slot. Some of these were pretty big groups of 10-15 people, and some were smaller, a handful at most.

During a few occasions, friends of mine and I would throw in a similar amount to play a slot together, just to do something social together while at the casino. We’d joke around and just have a good time while playing a slot. Slotting can be an isolating experience if playing on your own; a group pull brings the excitement into a group setting that can be fun to experience together.

Unlike the formal group pulls described in the previous sections, there wasn’t any sort of formal structure. We’d each take an equal number of spins and then decide what we want to do together – cash out, move on to another machine, etc. Generally speaking, if we got solidly ahead, we’d usually cash out, but if we only had a partial amount, we’d keep going.

In all of the above situations, someone’s getting the comps for the play. I usually believe whoever is taking the trouble of organizing it, tracking the spins, etc., should generally have right of first refusal on the comps. (Usually the person whose card is in takes the tax hit if a handpay is hit as well, although this varies by jurisdiction so it’s also worth knowing the rules where you’re doing this.)

If you have 20 players betting $20 each, that’s $400 of coin-in. At $50 each that’s $1,000 of coin-in. For normally lower betting players, that could be a boost to your next offer, so keep this in mind when you’re organizing these sorts of events.

It’s All About the Social

The common thread through the various types is the way it turns gambling into a social activity instead of a solo one. The slot community clearly shares an interest in these sorts of games, so ways that players can come together and have a fun hour playing a game and experiencing something different by betting higher than normal can be a fun activity.