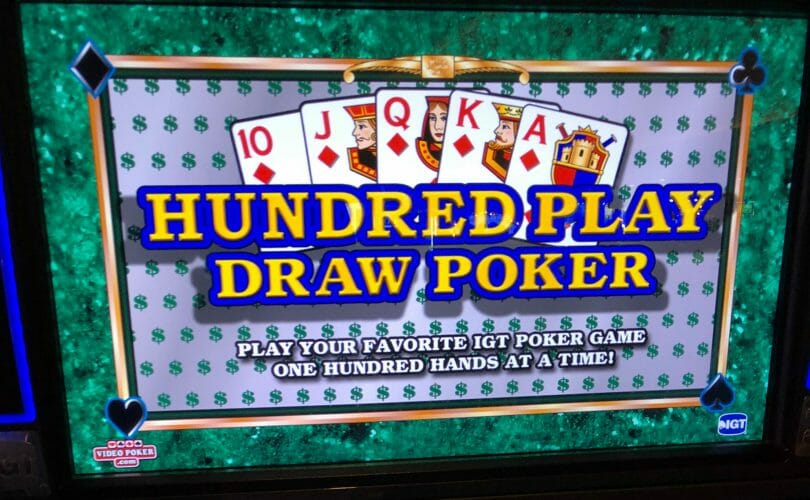 I’ve always been into Video Poker, and find it relaxing to play. I also have had some remarkable runs on the game. Among my best runs have been playing on 50 and 100-hand Video Poker machines usually playing Jacks or Better, which is my normal game of choice.

Standard multi-hand video poker machines tend to work the same way – a hand is dealt, you keep your cards (which are retained for every hand on the board), and then the hand is played out x times, x being however many hands are on the screen. So if you have three hands, three outcomes are played; five hands, five outcomes, etc.

When you get to 50/100 hands, it can get interesting because you get so many chances to make something happen. For instance, if you hold four cards to a royal flush on a 50-hand machine, your odds are reasonably good to get a royal flush because the overall odds at that point are 1 in 47.

One big thing about the games I like though is it smooths out volatility when I have a goal in mind. Twice now I have used these machine types to earn enough tier credits to renew my Diamond status with Caesars Rewards. In both cases I was up considerably while on a good run by the end of my run on the machines.

The reason volatility is smoothed out is simple: Instead of playing a $5 single hand at $1 denomination, you’re playing 100 penny denomination hands at 5 cents a hand. Theoretically your top prize is the same – a dealt royal flush will pay $4,000 on either.

But you could complete a royal on that single hand and win it too – each royal completed will be $40 on these penny denomination hands. But you get more tries at the Royal too. Similarly other dealt hands will pay similarly as if they were dealt on the same total bet on a single line. So my four of a kind above pays the same as if it was a $1 single hand Jacks or Better machine as I got paid at the 2 cent denomination 50 times (2cx50=$1).

Generally speaking the pay tables on the hundred plays will be lower than their $1 denomination counterpart, but that’s not always the case. I’ve checked Video Poker pay tables and found higher than normal on 50 and 100 hand machines multiple times, which make them a good play, since the comp and tier earnings on them were not lowered for that benefit.

This doesn’t mean the games can’t be winners and you can’t win big. I’ve had great sessions on these games with enough frequency that they can be plenty fun when they’re dealing out good hands.

And when you get less than ideal hands, the number of ways to play it out means you usually get paid something back for your investment, so it’s not like wagering $5 on a slot and easily losing it all in that single spin. It’s not unusual to get a third to half your money back on a poor starting hand.

I’ve found mislabeled games, which pay accurately but you have to be careful. For instance, this win above was on a “Jacks or Better” that wasn’t actually Jacks or Better, but Bonus Poker Deluxe. I didn’t mind because my dealt four of a kind paid 400 credits instead of 125 for Jacks or Better, yielding me $1,000 on this $12.50 wager.

By far the majority of the Video Poker I find and play is IGT-designed, but some of the casinos I’ve played at in recent years have had a version by WMS that’s pretty good too. When the machine is running slow it can be impossible to play, but when it’s running as designed it can be as fun as the IGT ones.

Ultimately, I like multi-hand poker over single hand as a rule, and find myself enjoying the 50/100 hand games. Their combination of smoothing out volatility and providing good value for the wager is a lot of fun. For the Video Poker fan, it’s one way to play and, while it may take the edge off the bigger wins, it can also give good play value.