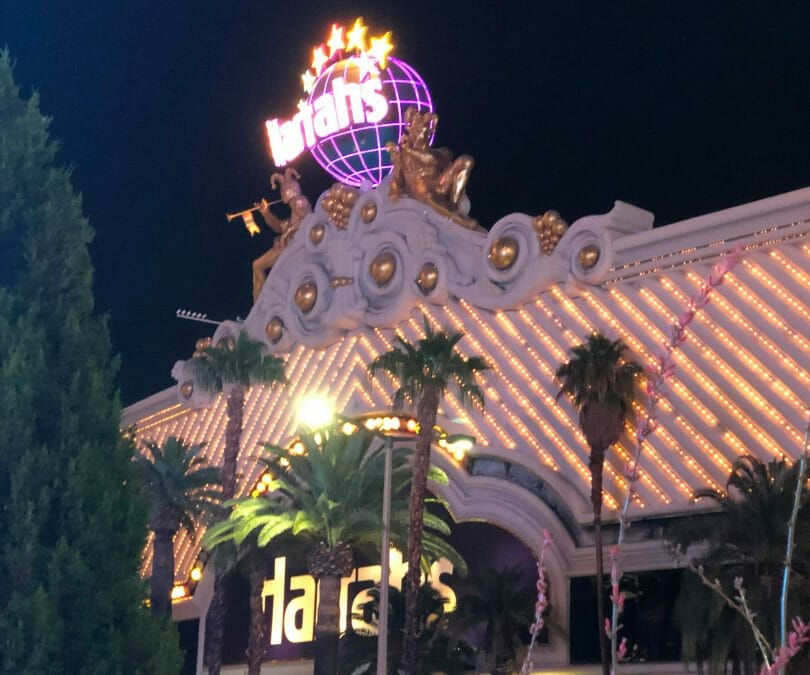 The Harrah’s Las Vegas property first opened nearly 50 years ago. It’s gone through quite a few permutations – at one point it was themed to look like a riverboat – but its popularity and position is maintained.

Over the past few years, the property has seen quite a few updates between room renovations and the casino floor being revamped, something that Caesars has been doing over time across its strip properties. That’s led it to become a nice, budget-friendly modern option for Vegas strip guests.

Harrah’s was the first Caesars casino I stayed at; after a couple of years of visiting Las Vegas, I had earned offers for comped rooms at Harrah’s (albeit with resort fees, as at that time I had only obtained Platinum). My experience that trip (which was a couple of years ago) set some feelings about the property that is still maintained today.

One thing that’s really amazing about Harrah’s is despite its size, the property feels pretty compact. The casino floor basically exists right alongside the sidewalk on the strip, so you can walk right in and find table games and slot machines. Its location is effectively at the northern end of what’s basically a zone of Caesars Rewards properties on one side of the strip.

The slot floor extends well into the building, so they didn’t skimp there, and there’s been a strong video poker section maintained there. There’s a good mix of low limit and high limit games, including a high limit area.

The table games line the area near the strip, and include some lower limit options. I’ve at various points played $5 craps and $5 blackjack there. Table games tend to be pretty affordable, although the lowest limits will have less player-friendly rules, much like other casinos.

When I visited in December, the casino floor was going under a pretty disruptive renovation, with many parts of the casino floor covered over for new carpeting, ceiling, etc. This follows other renovations such as the lobby, new tile, and so on that has been put into place over time. Harrah’s has overall seen a pretty complete renovation over the past few years.

The hotel, like others under Caesars ownership on the strip in Las Vegas, has completed a multi-year renovation process that began with one set of new hotel rooms a few years ago, and saw the rest of them converted relatively recently. I stayed in the first batch of renovated rooms after they opened.

Caesars for many of their properties has a similar “feel” to the rooms, even if the “theme” (colors, patterns, etc.) are different. Harrah’s is no different – it’s a good, comfortable, basic, modern room.

This brand standard for Harrah’s has been extended to room renovations in other markets like Atlantic City and Laughlin. I like this, because you have a bit more predictable experience when staying in one Harrah’s hotel vs. another.

I have yet to stay in the Atlantic City version (each time I’ve stayed at Harrah’s there I’ve been given one of the older, unrenovated rooms, still comfortable but not the same), but had the chance to stay in Laughlin and it felt smaller and slightly cheaper than the Las Vegas version (it’s Laughlin, I’ll forgive them), but otherwise similar.

They’re part of Caesars Rewards, and so all of the pros and cons that go with that program carry on into Harrah’s. I’ve always felt like I’ve got a good gaming experience there, and that means I can earn some comps along the way too.

Like many markets, Vegas has access to occasional comp programs that are market specific. Most often this comes in things like the Quest for Rewards badge collection promotions, which encourage spending some time in each casino and gambling. Usually when these are active in Vegas, since I’m going to likely bounce around between the properties anyway, I’ll make sure I hit the minimum for a badge to pick up a few extra tier credits.

The compactness of the property extends to the accessibility of the monorail, which has a station that connects to it and the Linq (although that station was difficult to access in December on my last visit as part of the Caesars Convention Forum construction).

That’s a nice touch, as monorail access means easy access up to Sahara and down to MGM Grand. The monorail is not always the most convenient option, but I do like it, and leverage it when I’m at a property that’s connected well to it.

I also like their version of a food court, which instead of a bunch of chain fast food restaurants is a lot of quick serve or self-serve options that offer good variety at a decent price, like a build your own salad station. They do have a good variety of food options, but as someone who likes to often grab and go, I found myself eating there even when staying nearby.

Before the COVID-19 pandemic there was a daily slot tournament with a nominal amount of gambling required to enter, which from reports of those who have visited recently it appears this is on hold for now. But given how long it was around, I wouldn’t be surprised to see it return in some form at some point.

It’s a fun vibe and a good location, in the thick of things on the strip. It’s easy access given its location, and the compact design relative to other resorts makes it easy to get around, or get to bed when the time is right. And despite its shiny newness is still an affordable option for those on a budget.

You can book rooms at the Harrah’s Las Vegas through vegas.com, which offers a Best Price Guarantee. If you find a lower price while booking or within 24 hours, contact them and they’ll match it! Vegas.com routinely runs promotions on hotel rooms as well, making them a good place to check.