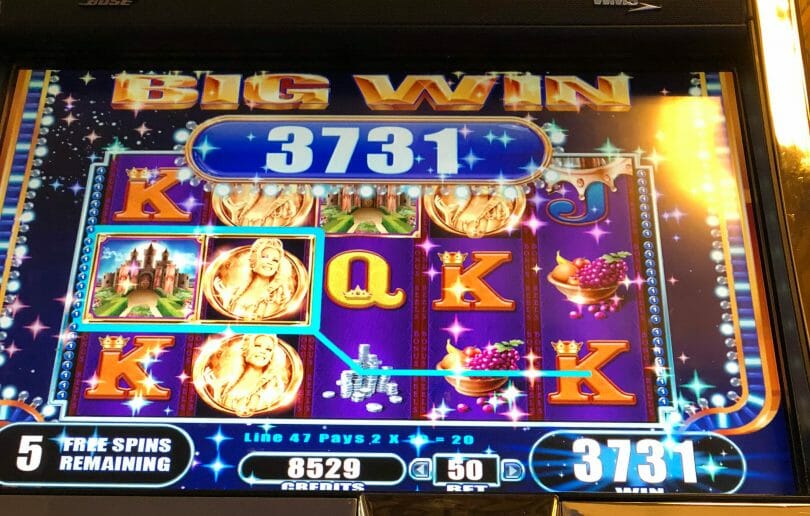 Recently I delved into the definition of a handpay, and whether it needs to change with the times. But what about a Big Win?

Unlike a handpay, most definitions of a Big Win are based on a multiple, and not a fixed dollar amount. If you were to ask King Jason Slots or Diana Evoni, two prominent slot channels, they tend to dub a 100x win or above a Big Win Bonus.

Slot manufacturers tend to fall into two camps, and it’s usually based on the type of games they produce.

Of course, this isn’t a hard and fast rule. Konami has been using their Big Win music and graphics on 10x mini wins on some machines more recently; on their more volatile games IGT will sometimes bump up the big win music to a higher multiple. But IGT has even broken out the big win graphics (although without the word Big Win) on some games below 10x, like Scarab.

Why would manufacturers give different definitions? On lower volatility games, since the pays come more frequently, but are smaller, a 10x win is a bit unusual for those games more often than not, so that’s the threshold where they want to get you excited.

On more volatile games, since bigger multiples happen with higher frequency because of the increased frequency of dead spins between them, celebrating 25x makes more sense. The higher volatility manufacturers may send some coins flying or have some special music at 10x, but it’s subdued compared to the bigger win music saved for the 25x and up wins.

The reality is it’s part of the excitement manufacturers want you to feel by having those big win celebrations here and there – rare enough you don’t see it all the time, but frequent enough that you get excited for it when it arrives.

Fortunately, though, because it’s based on a multiple of your base bet, it’s easier to have consistent excitement regardless of bet. A high-limit Lightning Link big win will happen at the same multiple of your bet as a low-limit one, so the rarity of it is roughly the same.

So next time you get a big win, celebrate, and remember how you got there, based on which manufacturer’s games your playing and what your bet level is.