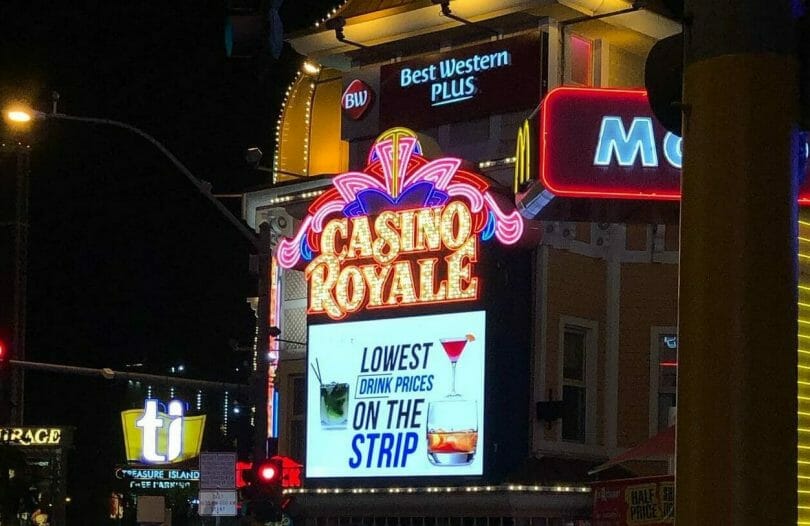 Casino Royale is somewhat of an abnormality at this point on the Las Vegas strip. It’s not part of a mega resort, it’s a value-driven property, yet it’s got a prime location on the strip between Harrah’s and Venetian.

I’ve played there a couple of times, and had some good luck while playing there. It’s not a big place, but it’s a fun area to hang out for a bit if you’re looking for some value.

Before the pandemic, one of Casino Royale’s known value drivers was a low-minimum table pit that would feature blackjack, craps and more. The pit was removed as part of the casino re-openings and has not been restored at last check.

Their video poker tables aren’t much to write home about, but given its location on the strip, it’s not particularly surprising either. They do have a few games above 98% expected payback, but that’s about it (although a couple are relatively new, so perhaps this is a first salvo in an improvement at the property).

The hotel is a Best Western Plus on property. There’s about 150 rooms – this isn’t a mega resort, as we’ve already noted. The rooms are dated feeling in some cases but certainly get the job done for what it is.

That said, room rates here can be up there, given its location, moreso than some of the other budget properties on the strip, but they don’t charge a resort fee.

The Players Club is unique to just this location, not surprising given its non-chain ownership. It doesn’t track points – the goal is their unique promotion, which is unlike anything else I’ve seen.

The casino advertises a “The First $20 is On Us” promotion where if you lose your first $20, they’ll instantly rebate that to you as free slot play. Then, each $100 lost thereafter, they’ll rebate you another $20. That’s it – no points to earn or redeem, no tiers to move up on or anything like that.

During a lower budget trip where I was on a downswing, I went there to play, and instead of getting $20, I proceeded to win a few hundred dollars on the slots. I didn’t get $20, but I got cash, so that works for me. I don’t know if I have to give that all back before getting loss rebates in the future – that’s a good question for a future trip.

The property is all about value, with a McDonald’s and Panda Express just outside the venue on one end and a Denny’s (open 24/7) and White Castle on the other. In the back there’s a food court with a Subway (also open 24/7), Pizza Hut and a Footlong Hot Dog place that offers good deals as well.

There’s an Outback Steakhouse for those looking for something a small step up – usually the steakhouse is the fancy restaurant at a casino but this is the standard chain restaurant many know. And facing the strip walking space there’s a Fat Tuesday for drinks.

The casino bar offers 12 oz bottled beers for $3, which is another strong value offering.

This isn’t a property with a massive amount of activities, but it can be fun to stop in for a couple of hours to kill some time and get some great values.