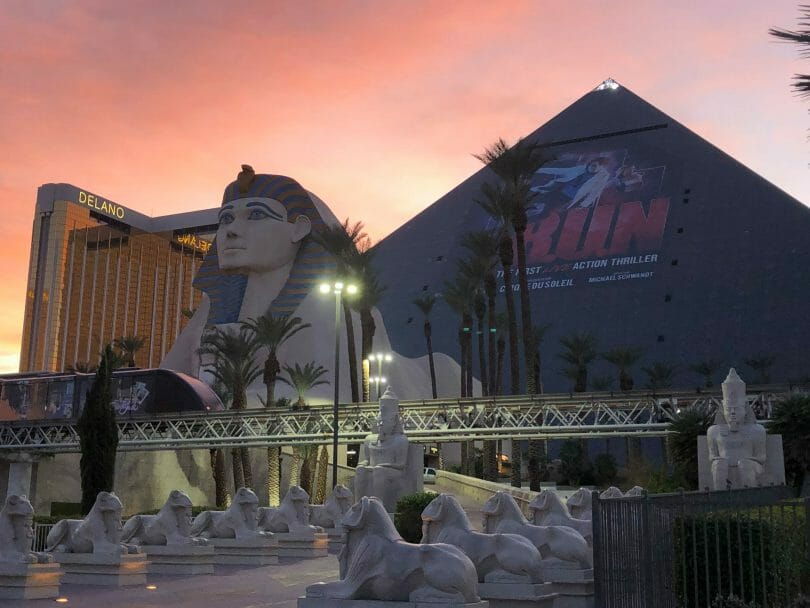 When it comes to Las Vegas, Luxor Las Vegas was built in a certain time and mindset, where theming was still important to the idea of what a casino resort should be.

While the theming has slowly been de-emphasized, a property like Luxor, with the unique pyramid design that houses its casino and many of its rooms, it still has a somewhat unique position in the Las Vegas skyline, and its value proposition is pretty strong.

While there were at one point rumors that the property’s days are numbered, for now, it remains one of the budget options for Mlife players, and it not only reopened after the COVID-19 shutdowns ahead of other properties like Mirage and Park MGM, but in 2021 is now seeing room renovations. Let’s take a look at the property and what you can expect.

The casino floor takes up the bottom level of the pyramid for the most part, which of course is going to be the biggest floor of the building. Many of the food options surround the gaming floor, and others, such as the food court, are up one level. This puts the casino in the dead center of the building, with a solid amount of slots and table games.

Many of the slots are towards the rear of the building, and by the two connectors (to Mandalay Bay and Excalibur), and like many of the Mlife properties in Las Vegas feature a mix of older and newer machines. There’s a decent sized video poker area as well as a high limit area,

The table games are towards the front, and around the lower-middle end of the table game minimums as well. Excalibur and New York-New York promise $5 tables for games like Blackjack, whereas Luxor I traditionally see $10. I’ve also played $5 craps games at Excalibur, although not in the past two years; I’ve never played below $10 on either game at Luxor.

Luxor has rooms in three sections: The main pyramid, and then two towers, East and West. The tower rooms have been refreshed in recent years, as has some percentage of the pyramid rooms.

I’ve stayed in a number of room types in the towers (I’ve yet to stay in the pyramid, mainly because I’ve had a number of suite offers in the towers as of the last year or so). The basic tower rooms are comfortable, clean and modern, although the beds are a bit low to the ground and mattress a bit thin for my taste. The suites are a step up, and quite comfortable.

The rooms have a decent amount of space, and have tended to be quiet, a nice plus when staying in a big complex like Luxor. The tower rooms are off the main casino floor by a bit of a walk, which helps shield them from the chaos of the casino; on the other hand the pyramid rooms are inside the main pyramid itself. I’ve seen reports that they can occasionally be more challenging, but I don’t have any personal experience to this effect.

Despite being updated, the rooms remain a good value for Las Vegas.

UPDATE 5/1/21: The Pyramid rooms are getting renovated as part of MGM’s 2021 investments in Las Vegas. While some of the furniture is hand me downs from Bellagio, which itself is going through room renovations, the overall product looks quite good and is a solid and overdue update for the rooms. This should bring the pyramid rooms in line with the standard tower rooms, which had been updated already.

Luxor is part of Mlife Rewards, and benefits from being in the midst of a chain of Mlife properties that starts at Mandalay Bay, extends to Excalibur, New York-New York, Park MGM, and via tram Aria and Bellagio. MGM Grand is also across the street from New York-New York.

As one of the lower end properties, Luxor is one of the easier properties to begin earning comps, and they tend to offer it as a complete set of rooms, free play and food and beverage, so you get more than just a complimentary room. If you play enough, it’s also one of the first properties (along with Excalibur) to be able to waive resort fees; unlike Caesars Rewards, waived resort fees come with the level of offer you qualify to receive.

Mlife has casinos across the country, and you can earn tier credits in Vegas and out of Vegas that work towards the same tier score. However, you earn much faster in Vegas. On the other hand, it tends to be easier to earn comp dollars outside of Vegas. I usually opt to accrue comp dollars regionally and take them to Vegas to supplement my offers.

Luxor can be a bit out of the way, but a tram connects it to Mandalay Bay and Excalibur, as do walkways. This can make it easy to have a cluster of casinos to enjoy instead of just being stuck with the Luxor casino, which, while reasonably large, can be exhausted if you’re there for multiple days.

It’s near the southern end of the strip, so getting to places like Circus Circus will be a trek without a rental car, a bus pass or a monorail trip. However, it’s close to the airport – I’ve had scenarios where I’ve gotten off the plane, grabbed my luggage, gotten into a cab, and been at Luxor in less than 20 minutes. (It’s rare, but it’s happened.)

As someone who doesn’t tend to eat very fancy while in Vegas, the diversity of relatively simple food options here is also welcome for me. There’s certainly a couple of nicer options, but between the food court, the deli, the buffet and so on, it’s a solid cross-section of options.

The Luxor has been a good home base for me for a portion of the last couple of trips I’ve taken, and I look forward to returning soon.

You can book rooms at the Luxor Las Vegas through vegas.com, which offers a Best Price Guarantee. If you find a lower price while booking or within 24 hours, contact them and they’ll match it! Vegas.com routinely runs promotions on hotel rooms as well, making them a good place to check.