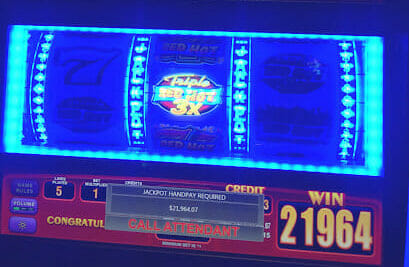 I recently shared my biggest jackpot ever, and Know Your Slots contributor Courtney Carr has a doozy of a story of her own! Here it is in her own words:

It goes without saying, one of the best parts about gambling is hitting it big! Even with that understanding, I never really grasped just how good a big win could feel until I hit one of my very first handpays. This happened on a random September afternoon in 2019 at Rampart Casino.

Before we get to which machine I hit it big on, I think it’s important to note how I picked this game. The first factor was the style. I have always like the more traditional feeling games with visible reels, preferably five or nine lines, with the option for a bonus feature.

The second factor was I wanted to be near the table games area because my husband and his friends were throwing dice. I wanted to be close enough to hear when they hit the point but not too close that I could be blamed for any negative vibes- I’m the superstitious gambler in this scenario.

That narrowed my selection down to a bank of three machines. Of the three, I picked the one in the middle, “Triple Red Hot 777 Free Games.”

With my game selected, I nestled into the chair with my hundred dollar bill locked and loaded to see if I could land anything memorable. Before I could even order my customary gin and soda, I saw the three progressive symbols lock in place.

I initially thought the line hit would be something more along the lines of $1,000 or even $5,000. At the time I was still a “newbie” to the world of gaming and somehow missed the giant number that displayed next to the symbols at the top of the screen. My progressive symbols just paid me out a cool $21,943.07. Not too bad for a $5 bet!

I sat in silence for a few seconds, processing what had just happened. I was sitting alone and quickly started to gather a crowd. I called my husband but he was in the middle of shooting and couldn’t answer. Since I continued to call, he sent his friend over to see what was happening. The friend had the same reaction, standing in silence and looking at the gray box that said “call attendant.”

He stayed with me while waiting for the rest of our group to come over and, of course, the slot team to verify my pretty large win. Those five minutes will go down in the history of my life as some of the most nerve wracking. I was having a full on “pinch me” moment and was mildly convinced that the slot team would say it didn’t count.

Once they arrived, I kept asking if it was a malfunction but they reassured me it was not. Instead, the team asked me how I would like the money. I took home $20,000 in the form of a check (I know myself too well to have that much cash in a casino), and put just under $2,000 in my wallet.

After being paid out for the jackpot, I knew to ask for a host right away. She came over to introduce herself and handover her business card. Never one to miss an “earned” meal in a casino, I promptly asked for a reservation at their steakhouse. After being a little too loud in the upscale dining establishment, my crew made a few more pit stops at machines before heading home.

Courtney is all about everything and anything gaming. From playing blackjack a little too aggressively to swinging for the fences on high denomination slots, she wants a piece of the action! Courtney’s casino passion extends into her professional life, having spent time in the marketing department at The Golden Nugget Las Vegas and now serving as the Digital Marketing Manager for The Queen Casino & Entertainment.