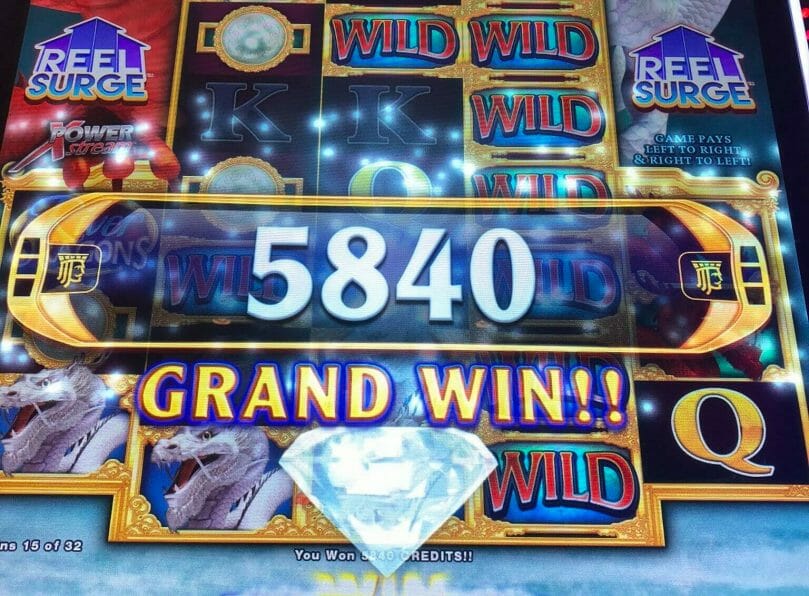 In the last Slot Moments post I was saying it was a pretty rare occurence for a grand jackpot to be won while on a live stream, something Slotaholic did during a group pull recently.

He wasn’t the only one to accomplish the feat, as Brian Christopher managed a Grand jackpot of his own on Everi game Emperor’s Tree recently.

Brian began playing the game at 22:43 in this live stream:

The top progressive on this one is actually the Ultra, which when he was playing at Palms in Las Vegas at dime denomination, was over $30,000.

A couple of minutes in he triggers a picking bonus, which can be triggered with any wild coin symbol. The bonus has a progressive removal feature, like other Everi games with a picking element. A few picks in, he eliminates the $200 minor, with the next level progressive being $800.

He keeps picking, and finds another tree, eliminating the Major, which now meant the Mega was the least possible prize, worth $4,605. At this point he has two of everything else, and his next pick, aside from a tree, awards a progressive. He picked… the Grand, worth $11,418! On a $26.40 bet, that’s good for more than 400 times his bet.

This actually isn’t Brian’s first live Grand this year, as he also accomplished it on Coin Combo. That happens in a segment starting at 50:21 on this video:

Two curious things about both Grand jackpots: They were both on a $26.40 bet, and they were both NOT the top prize that could be won! That’s because on Coin Combo the prizes can be upgraded, which he accomplished, so the Major became the Grand and the Grand became the double Grand. He only won the Grand, not the Double Grand.

That’s not to take away from such accomplishments, which are rare regardless of bet, but shows you how newer games are even harder to hit the top prize as they continue to escalate.

Then again, there’s also the truly astounding Grand won on Mighty Cash on an 80 cent bet…