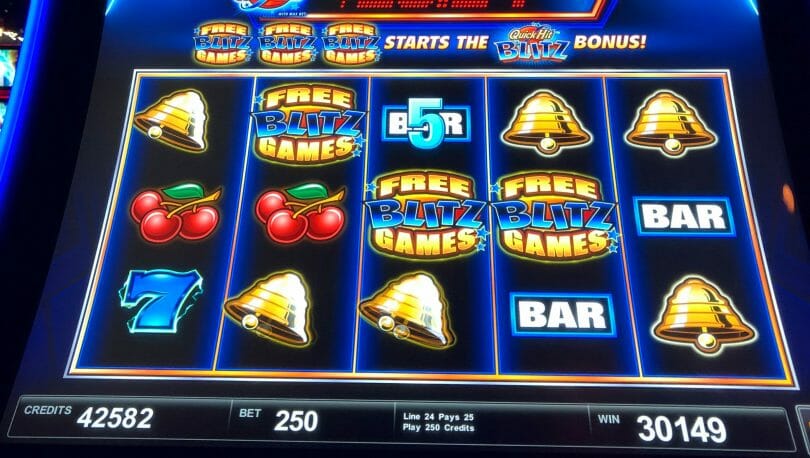 I’ve previously shared my love of Quick Hit Blitz. Like many good Quick Hit games the money is spread across line hits, Quick Hit jackpots and the bonus. The wrinkle with this one is the availability of Quick Hit progressives during the Free Games Blitz bonus.

TheBigPayback oftentimes bets much larger than he does here, but this 45 minute video shows lots of aspects of why this game has so much potential.

He started out on $5 bets on penny denomination. At that level, he had multiple Quick Hit wins early that kept him going until he began to get into bonuses. He managed multiple times landing the 7 Quick hit progressives, which pay a minimum of 25x his bet.

His first bonus was a disappointment, only making it to the second level and winning the 5 Quick Hit progressive prize and ended up with an 8x bonus. At this point he was down about half his $500 stake in the game.

He decided to keep going, however, and moved to a 2 cent denomination version (some Quick Hit Blitz machines support multi-denomination). He opted to stair-step his bets across the various options at 2 cents. Again, the Quick Hit symbols begin to start showing up. Then he gets another bonus, fortunately for him at max bet.

In his first spin he yields an over $80 hit, and after a couple of spins the Blitz symbols start to really flow for a couple more spins, and then level three it stalls out again. But this time, he got a more helpful $240 win, putting him closer to his starting stake.

He decides to keep going once more, continuing his stair-stepping on the 2 cent denomination options, and some line hits begin to show their way out. One good set of bars yielded him $60 on a $10 bet, helpful when many of his bets are lower than that while stair-stepping.

He decides once more to keep going, this time on the 10 cent denomination, and this time he switches does $5 and $10 bets, accepting he won’t get the full progressive amounts, but hoping for some more momentum.

Within a few minutes he gets one more Free Games Blitz bonus on a $5 bet. This one was the one that got him up the chain quite a bit. He made it to the six level, good for a $500 jackpot and some line hits along the way, but given his stake started at $100, he did remarkably well. He was one shy of a jackpot that would yield a handpay, but he managed to double his original stake (ultimately achieved with his back-up spins) with some patience and persistence.