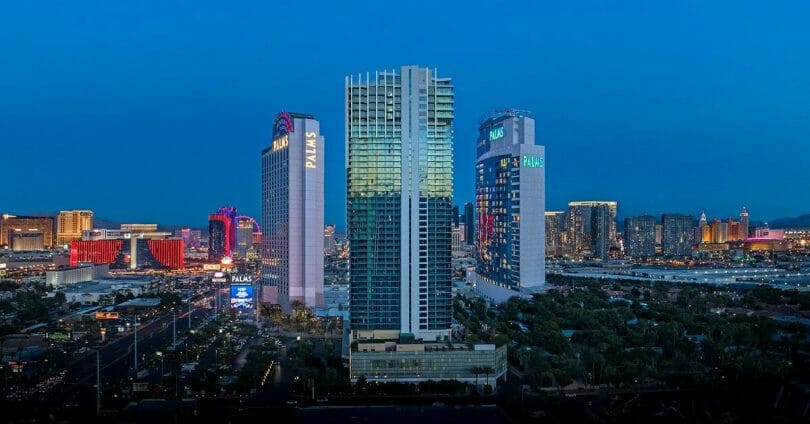 The Palms Casino Resort in Las Vegas isn’t a particularly old property, and in fact had been through a substantial update just a few years ago.

Despite that, its previous owner Red Rock Resorts decided to sell it to the San Manuel Band of Serrano Mission Indians, making them the first Native American Tribe to own a casino in Las Vegas. (Virgin Las Vegas has their casino managed by Mohegan Sun, based in Connecticut, but they do not own the property.)

The casino floor is pretty substantial, having been updated in 2019 by its previous ownership. Many older games can be found on the floor, along with some of the newest games, so there’s a good balance.

Some of the max bets on games in the casino are favorable compared to other casinos; I saw Quick Hit Blitz at $2 max bet and Quick Hit Jungle/Volcano at $1.50 max bet, for instance. This can make some games more accessible.

There are some full pay video poker options, such as 9/6 Jacks or Better, but most of the floor caps at around 99 percent payback (Bonus Poker) and goes down from there. The few over 100 percent options do not earn comps.

Table games were centralized in an area in the center of the casino floor, and minimums seemed about average in the post-pandemic Vegas world. There’s over 50 table games, and features standard options like Blackjack and Craps, along with other favorites like Baccarat and Ultimate Texas Hold ‘Em.

Palms has more than 700 hotel rooms and they too are in great shape. There’s a number of more standard room options, as well as a variety of suites that range from the more traditional into the very unique. All are well appointed, so you won’t go wrong staying at the Palms.

In October 2022 I stayed in one of their standard Fantasy King rooms, and the room was incredibly modern and comfortable. The color palette reminded me a bit of the rooms the Wynn offered before their recent remodel, and I loved the layout, which included some room to work and a couch space. These rooms clock in at a spacious 510 square feet, and it felt quite roomy.

It didn’t take me a whole lot of play to qualify for weeknight rooms, and I plan on incorporating the Palms into future Las Vegas stays.

The comp program is called Club Serrano, and is linked with San Manuel’s California property, Yaamava’. You earn 1 slot point and 1 tier credit per dollar on slots, and per four dollars on video poker. 500 slot points can be converted into $1 in free play. Tier year is on a calendar year and 12 months of inactivity can see your slot points expire.

Because the programs are linked, you can earn and redeem points and earned rewards at either property. Both work towards the same tier levels.

New players can qualify for a first day free play offer that earns you more free play based on how many points you earn. And they have a tier matching program in effect for higher level players of competitors nearby.

During my most recent Las Vegas visit I ate at Chronic Tacos in the food court, and Tim Ho Wan off the casino floor.

Chronic Tacos was a good casual fare, with a good combo deal on tacos with chips and a drink. I also ordered churros, which were fantastic, and a friend of mine with me poached a couple pieces out of my bowl because she liked them a lot too.

Tim Ho Wan offered a strong array of options, priced affordably and with sharable portions. If you like Asian cuisine you’ll find plenty to enjoy on the menu.

The Palms has an All You Can Eat buffet called, appropriately enough, A.Y.C.E. which has a Lobster night on Wednesdays and a Steak/Snow Crab night on Fridays. Other marquee options include Mabel’s BBQ and Scotch 80 Prime (their Steakhouse).

There’s plenty of more casual fare too; outside the food court there’s pizza and a cafe among the options available.

Travel Ruby has an overview of the Palms from when it reopened:

She also reviewed the A.Y.C.E. buffet:

Not Leaving Las Vegas covered the history of the property and covered the re-opening as well: