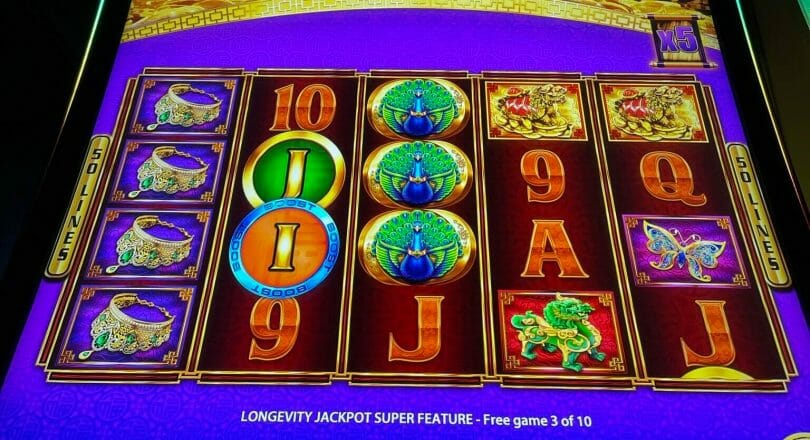 Diana Evoni‘s been playing slots for many years and sharing them on her YouTube channel, but it was one of her less extravagant bets on a new game that saw her land the grand, an elusive thing on any game but no less on a newer one.

Her $4.40 bet on Fu Dai Lian Lian Boost Peacock, the lowest bet on nickel denomination, clearly caught her by surprise, as the game loves to tease by offering all but one of the letters quite often on many of the progressives, without filling in the gap.

Yet in this case the last letter landed, and you see that moment where it processes what she just won. As it happens, as of when it was uploaded this was her largest jackpot handpay posted to her channel after all this time, despite bigger bets on games with potential for huge payouts!

Diana has certainly had her share of amazing runs and wins, but this one’s pretty spectacular, and particularly awesome given it’s now been more than 10 years since her first videos were uploaded to the channel. As one of the original slot channels, it’s great to see she’s still reaching new markers to celebrate, such as her biggest recorded jackpot.

As it happened, she shifted over to Fu Dai Lian Lian Boost Tiger after her handpay, and was able to keep the winning going from there in a follow-up video, so her luck didn’t stop there!

Both of these games have a lot of potential; a write-up of the Peacock version has now been posted.