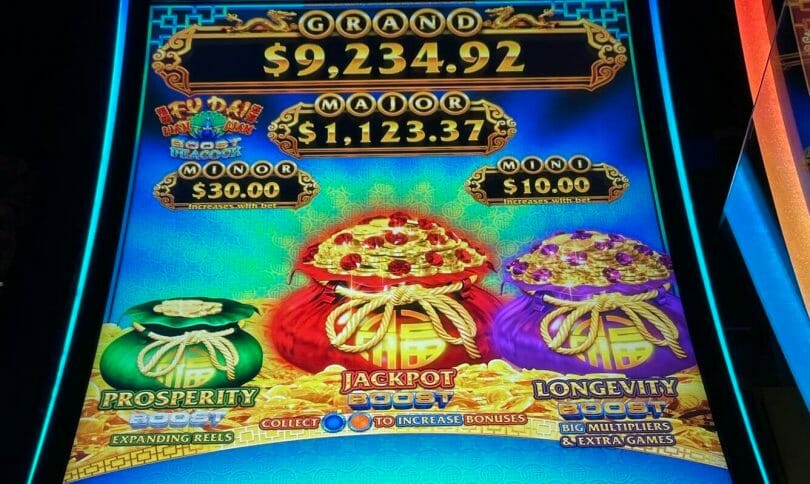 Fu Dai Lian Lian – aka “The Bag Game” – is one of those games that quickly took hold on casino floors. So it’s not surprising that Aristocrat has already released a follow-in pair of games in the series that iterates a bit and adds a new aspect, the Boost.

In practice, it’s a small tweak to the game’s bag element, but it also made for one of the most confusing and complicated pay table write-ups I’ve seen. This is largely to the fact that since you can trigger 1, 2 or all 3 bags for a bonus, and now have a boosted and non-boosted version, that’s 14 unique bonus combinations.

I’m not going to go through them all – the original review will offer the core information you need to know – but will instead focus on what makes this game different, and that’s the Boost feature on the bags.

As the bags collect coins, they can reach a point where the bag gets full enough that the word Boost lights up – when won with Boost lit up, the bonuses can be enhanced.

As a result of this Boost feature, which is linked to a bet level, the bags are now persistent to their bet level, and this is indicated on the bet panel. However, it’s important to remember two things:

As such, this is one of those times where a persistent feature does not fundamentally improve the chances of winning, because there’s no guarantee a boost will be successful at increasing the payouts, or that you’ll get the bonus sooner.

Instead, it’s worth treating more like comparing progressives – if you’ve got a machine with the bags boosted on a bet vs. one where they’re not, it’s worth taking the boosted machine.

The boosts work (on the Peacock version, which is the focus of this review) as follows:

You can still retrigger the bonus, just like before, on the non-Jackpot-inclusive features. If a boosted bag is up on the screen and spins, you get the Boost feature.

My most successful session on the game, one of the bags was in Boost mode when I sat down, and a second went into Boost mode as I was playing the base game. I eventually got a boosted Longevity Jackpot Super Feature, about $50 in on 88 cent bets.

My bonus was $55, so it was successful at getting me a touch ahead, but it was a lot of work to get there, and the bonus could have easily been worse, given I had won two boosted Mini jackpots as part of it.

It’s definitely a fun variation, though, and if you loved the originals, you’ll definitely enjoy the new versions.

I recently shared Diana Evoni’s amazing win on the game in a Slot Moments post.

Here’s a bonus by Us vs. Slots on 2 cent denomination:

And here is KURI Slot playing the Peacock version: