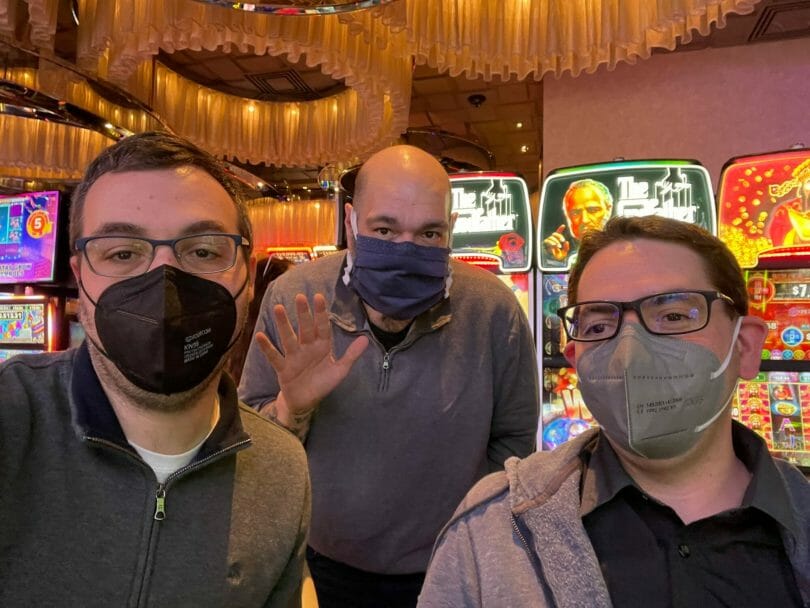 Today’s Slot Moment is a purely selfish choice, in that I love this video in part because I got to see it go down in person. VegasLowRoller and I have known each other online for a long time, but it was during my recent Vegas trip where we finally got to meet for the first time.

We met along with my friend Gabor, who was out in Vegas too and with whom I had planned the trip so we could also see each other. (Hence, three of us in the picture at top.)

The two of us almost got to meet him previously in 2018, but circumstances got in the way, so when we were able to ultimately arrange a meet-up at the Cosmopolitan, where he could also film, it was a wonderful opportunity to finally connect in person.

VLR and I had a great conversation, and then we started to gamble, initially off camera. But I get that a channel needs to generate content, so he began working on a video. I played alongside him for much of it, and he got off to a rough start, with $300 down in the first game and $200 down in the second.

As an aside, during the second game I’m the person he referenced getting the bonus, and I initially thought I won the mini and that’s it – I didn’t realize it kept spinning until you get the games. I went from hating to loving the game in about 15 seconds once I caught on. It goes to show you when you jump into a game without reading the rules, expect to have a game go a different way than you expect.

His final machine choice was Clue, a game I had only seen a couple of times but it looked like a struggle. That’s when the machine came alive, with a series of features and bonuses that was just an amazing run to watch. Gabor was playing a Wonka machine nearby and not doing too badly himself, and I just decided to watch and take it in.

It was absolutely amazing how Clue just seemed to be looking to put on a show, yielding so much in a single $100 bill session. It made for an epic comeback that I won’t spoil, but the timing of the comeback was incredible. Gambling is a roller coaster, and this one shows both the lows and the highs.

For those who wonder if channels show everything in a video, the answer is: Not everyone will, for various reasons. But for the purposes of this video, you saw a window of time VLR gambled – these were the three machines, in order, that he played, and so the outcome of the comeback was not edited in a certain order – this is how it went down in real time.