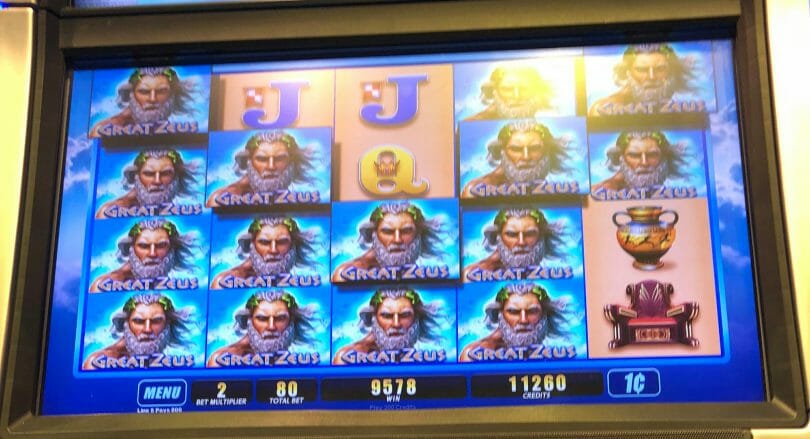 I’ve been watching slot machine videos on YouTube for quite a few years, and one channel I’ve watched periodically throughout all that time is TheBigPayback.

Tim brings great videos to light on a daily basis, each day focusing on a single game, which is great for those who like to seek out videos on specific games. He’s not afraid to bet big, either, and some of his earliest successes were on pretty massive wagers.

One such example was his win on the original Zeus, which has been making a comeback in recent months on casino floors. His win was on a high limit Zeus machine with a massive $45 a spin bet (9 lines, 5x bet multiplier). The game offers 10 free spins with three symbols triggered, and most of the pays fall in the stacked Zeus and wilds if you can get them to line up.

In this case the wilds and Zeus symbols came out in force and frequently, leading to such a massive success, nearly 1000x a bet, which is great on any bet level but of course astronomical on a $45 bet.

While he’s had some amazing wins over time on his channel, this is still one of the most memorable, no doubt because of the full screen and the unusual nature of the win, especially for that era on YouTube (the video was even stolen by other channels at one point).

And for those who loved his early Zeus videos, never fear – he’s given the modern Zeus remake a try as well, with some awesome results alsoe!

Are there moments you love from a favorite YouTuber? Share them in the comments below and you might see it featured here on an upcoming Slot Moments post!