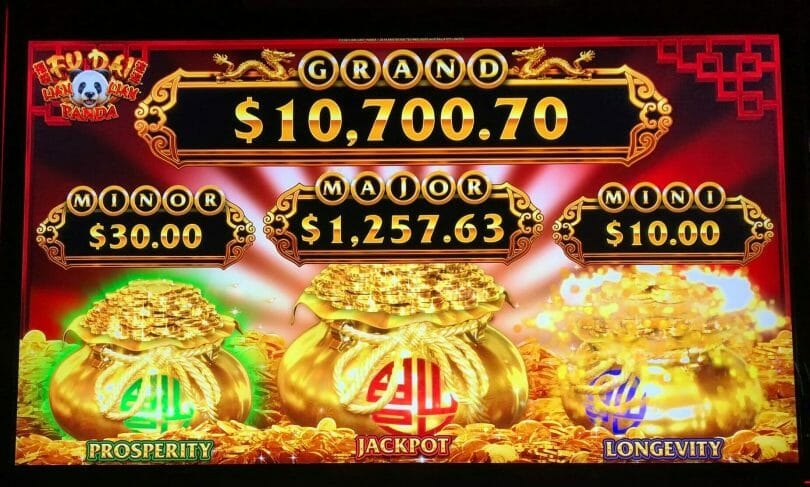 Some games begin to be identified with certain people, and Slot Queen is definitely well known for being a big fan of Fu Dai Lian Lian, which in the slot community has taken on the nickname of The Bag Game.

This game’s become popular enough that it’s caused a lot of copy cat games with three bonuses that can mix and match together, but the original continues to draw a lot of play, including by players like Slot Queen.

There are seven bonuses all together – the three individual bonuses, the three version of two joining together for a bonus, and the last is all three bonus types joining together to trigger the Mega Feature. It’s the rarest to get, although not so rare that it’s impossible, and generally has the potential to be quite lucrative.

Here’s an example of one on $1.76 bet. The combination of taller reels, stacked wilds, free games, the chance at progressives, and a line hit multiplier all fuel the ability to build up the win meter at a pretty good clip. And then a 100 lines of four of a kind on the last spin hiked the win even further, placing it at just about 250x her wager.

Here’s another example, this time at a $2.64 bet. A couple of good line hits mixed in with a collection of other smaller pays made this one a strong outcome as well.

This last video has three mega features, the strongest of which is in the front with an over 200x win. This, too had a strong line hit payout so that is a good indicator of what can help make this bonus click.

But one thing to remember about the Mega Feature, seen here, is it can occur as a retrigger during a non-jackpot bonus, as the coins can flip around again on non-jackpot bonuses. So you could rack up some other wins on the game in other bonuses, flip all three bags in that bonus, and then follow it up with a Mega Feature.

With all of these on bets under $3, it shows the potential of a game like this, and we haven’t even covered things like the progressives, which can pay at any bet level. This is another great example of an Aristocrat game that has the opportunity to deliver an over the top win.