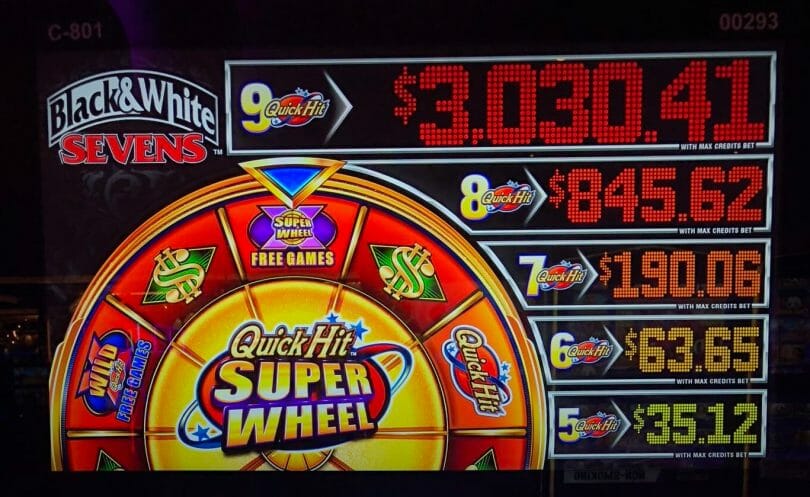 When I launched the Slot Moments series, I noted that one of the goals was to highlight videos that show the potential of a game. Today I’m highlighting a video from Slotlady, and it doesn’t have any handpays or gigantic wins, but instead highlights the potential of hte mechanical 3-reel Quick Hit Super Wheel games.

I’ve had my share of good moments on these games, including a great comeback on my bankroll when I was down to my last $20, decided to do $2 max bet spins on the game, and got a Super Wheel Free Games bonus that got me more than 50x my wager and back into the hunt.

An even better scenario happens here for Slotlady, where she has two Super Wheel free games bonuses.

The Super Wheel free games bonus is pretty cool in that each free game, the wheel spins, adds the value to the meter, and every time you get a Super Wheel symbol, you win that amount. As the bonus progresses, and the meter grows, the multiple of your wager gets larger, and so the value of the bonus quickly becomes apparent.

The fact she got two back to back is a bit unusual, as there’s multiple bonuses and features on the wheel when you trigger the bonus. But it shows that even with only 8 or 10 free games, the value of that Super Wheel symbol can grow fast, and the game can drop more than one of the symbols in a single spin to make it even more lucrative.

She’s featured the game on other videos on the channel, many with less success. In that way, the video above shows a bit more of the potential of the game, but if you want to see other bonus types, or more average bonuses on the game, the footage is certainly out there.