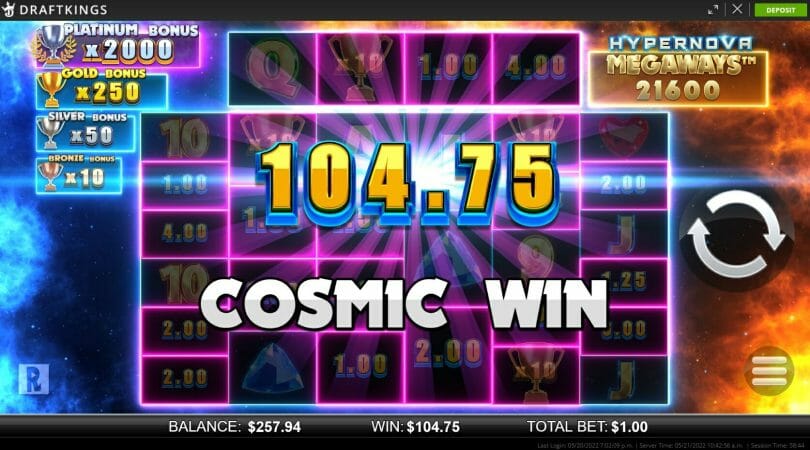 On a recent video I did with The Jackpot Gents, a viewer asked what sounds like a simple question, but isn’t necessarily:

Are the payouts better playing online slots? What do you recommend as far as the online slot sites or playing slots online?

For this there’s (at least) three buckets of online sites to speak of, and each has their own answer. So let’s review each in turn, as I see it, and if you have your own experiences, please feel free to share them in the comments.

The first bucket are legal in only a handful of states, and are regulated state by state. As of publication these exist in Connecticut, Delaware, Michigan, New Jersey, Pennsylvania and West Virginia.

Because these regulations look and work like the regulations for physical casinos, you’ll have the same level of trust as playing games in those states.

I’ve played in two states, New Jersey and Connecticut. Both are operated directly by, or on behalf of, major brands, and therefore also have benefits like linking into casino rewards programs for the physical casinos.

For instance, I can earn Momentum Dollars playing on Mohegan Sun’s site in Connecticut, and earn Caesars Rewards tier credits and reward credits playing on their online casino in New Jersey.

Many games list the payback in them, and they tend to be much better than the physical casino paybacks, in large part because these games can be offered and operated with much less overhead. I’ve often seen 94-96% ranges, even on smaller bets, which hands down beats what you’d get for small betting in a physical casino.

So betting a similar bet level on online casinos will tend to pay back better. Of course, you earn comps slower, but that’s an understandable (and in my mine, totally fair) tradeoff.

There’s a second class of sites that operate as social casinos with a sweepstakes element. In those instances, you can play free to play versions of their games, and also play with what are generally called something like Sweeps Coins.

The idea is that you can earn free sweeps coins through a variety of activities, such as signing in daily, participating in contests, or buying additional coins for the free to play versions, which can often come with free Sweeps Coins. These effectively act as sweepstakes entries, and if you play with those Sweeps Coins and have some success, you can then redeem those Sweeps Coins for cash prizes or gift cards.

These sites are not regulated by the states like online casinos are, but generally the games are a mix of internally created games and/or those from trusted third party providers, and the games and social casinos do indicate they adhere to rules from locations like Malta, which can offer players some peace of mind, although those rules will not necessarily be as robust as they are with U.S. regulations.

Some providers also publish payback information data, which similar to the online U.S. casinos will outpace paybacks of physical casino slots. They can occasionally operate close to the U.S. online casino payback levels, but do not necessarily in all cases. So it helps to do your homework.

There’s a third class of sites that advertise to players in the U.S. Let’s start upfront by saying these are illegal, even though they may accept U.S. player deposits and allow them to make withdrawals. The jurisdictions that they operate in many cases have looser rules, which is why they’re able to do this to begin with.

The looser the rules, the more likely it’s going to be hard to know how reliable these sites are, and what the payouts will be over time. A lot of the things players suspects the physical casinos are doing (and aren’t) are simply more possible in these scenarios. As such, it’s really not recommended to play these at all.

If you must, do your homework. There’s a ton of these online, and reviews will help you understand what potential issues could happen, like withdrawal rejections or account bans for seemingly mundane reasons that their rules don’t allow, or high playthrough requirements to get access to a bonus, which can simply make it much harder to see things like free play or deposit bonuses convert to something that can be withdrawn.

If you live in a state with legal online real money slots, that’s going to be your best choice. Sweepstakes sites are an interesting alternative for those who don’t have them, and my experiences with them have overall been positive, but I certainly have seen some have issues, so it’s not perfect. And offshore sites are the most risky by a long shot, and I don’t tend to recommend them accordingly.