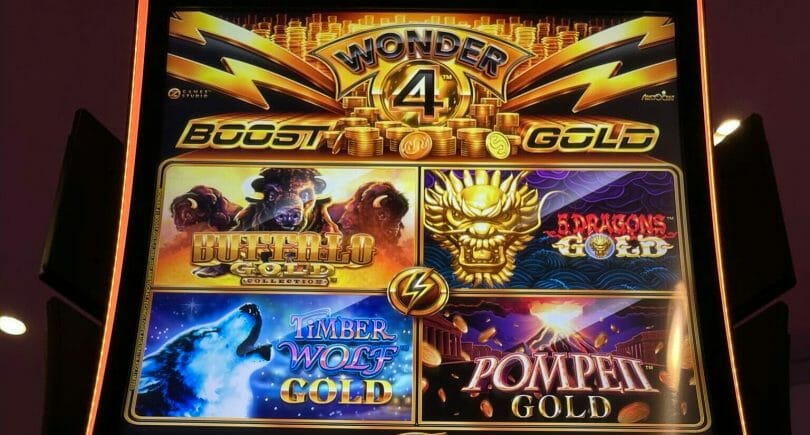 When I posted my last Slot Moments post about the All Casino Action channel, Victor was having the opposite of Victor Luck (as he has dubbed it), with two massive five-figure jackpots on slots. One of those slots was Wonder 4 Boost Gold.

As it turns out, that massive win wasn’t the only one on that game, or even the biggest, Victor would have on the game. The videos below follow what he did on the first: All four Buffalo Gold games, with a max bet of $12 a spin.

In this first video, he picks it up midstream. He didn’t start recording, but on the fifth spin he upgraded to extreme games, which is one step that can increase the chances of a wonderful bonus, because it gives you eight reel sets in which you can line up symbols.

Another is collecting all 15 heads, and he manages to do it again on this bonus, this time managing it on game 29. He ultimately had 41 games, so the last 12 games was eight sets of reels, all premium symbols turned to Buffalo.

His second Wonder 4 Gold jackpot wasn’t as big as the first two, but it’s not going to be easy to top $20k three times in a couple of months. This time the bonus was much slower to evolve. He only upgraded to Super Free Games on spin 46, and to Extreme Free Games on spin 51. The next spin, spin 52, he turns the last premium symbol to Buffalos and again achieves 15 heads.

It really shows how important the upgrades of more reel sets and buffalo heads are, and what can happen if you obtain the top end of this scenario. And even though this win was only $8,180.75, I certainly wouldn’t turn down a 681x bonus.

For Victor to do this once is impressive, but to do it three times in a couple of months is just phenomenal. It’s a unicorn that came out a few times for him, to great result each time.