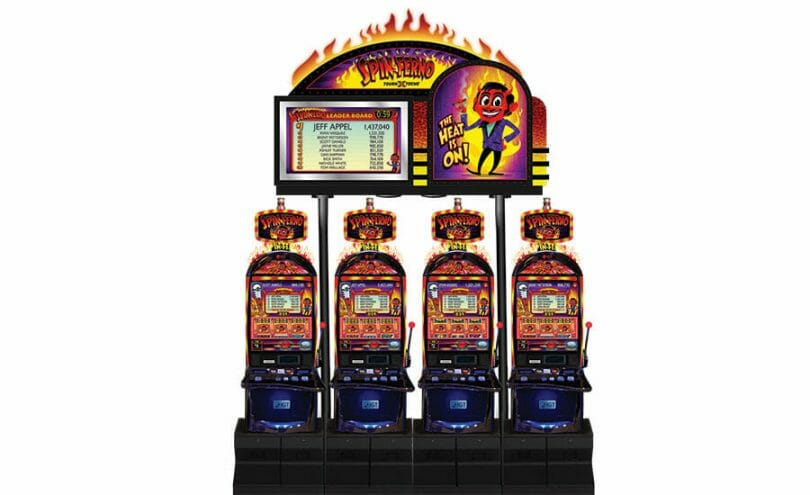 Many casinos now regularly host slot tournaments as a way to bring in players and do big events on set budgets. Since only a certain number of people win, the more players a casino can entice out for the promise of a chance to win a big prize, the better an outcome it can be.

There a few providers of tournament systems; one of the more popular is Everi’s TournEvent, which I’ve seen in many places.

However, during my Las Vegas visits this year, I noticed that Mlife properties had a setup with IGT’s Spinferno. Some of the casinos have daily slot tournaments you can enter once you’ve earned a certain number of points, generally 100: MGM Grand, Park MGM and New York-New York. It’s that last property where I’ve had most of my attempts at a tournament. You can also re-enter; you can have 3 shots at the prize at New York-New York, for instance, as long as you earn a total of 300 points.

The first time I played at New York-New York, they used TournEvent and I actually almost won; both of my visits this year have been on the Spinferno version. Both have a similar goal – spin as much as you can, and pop items on the screen.

Spinferno has an important tip though that could help you perform better. Some of the items that appear, you just need to pop. Some show three of the same item; you pick at random and hope you get the top prize.

However, if you see three different standard slot symbols like bars or 7s, you should take a beat and process what you have. This is a choice where you control the outcome. You see, the higher paying symbols award higher prizes. If you pick a single bar, you’ll get a smaller prize than a 7. If you pick cherries it’ll pay less than a bar, and so on.

I had noticed this during my first attempt of the day and asked the gentleman on duty and he confirmed it. For that specific scenario you have control. The items also don’t have a time limit, unlike TournEvent, so you don’t have to race to pop. That means you can think about your choice before making it

Now, it can still be tough to think it through while trying to also slap a button against the clock. And in the last 20 seconds, items appear as soon as you clear the previous, so you want to move quickly. But if you can walk and chew gum, if you have a solid score otherwise you can make it potentially into the top tier if you pick well.

Have you leveraged this knowledge to a tournament win? Share in the comments!