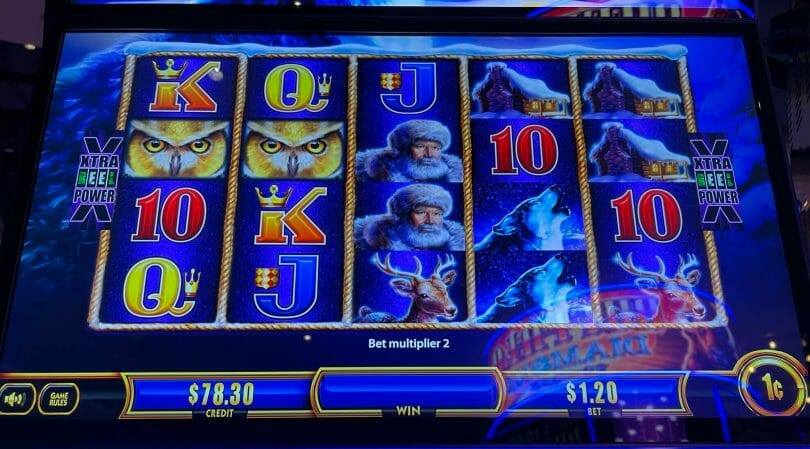 Timber Wolf Diamond, like its sister game Buffalo Diamond, is a volatile game that can deliver sizable returns even on bets that aren’t that crazy.

Seeing a jackpot handpay on a mid-sized bet isn’t the most outlandish thought on any Timber Wolf game, let alone Timber Wolf Diamond. It’s not that easy to achieve, but certainly is possible.

And we’ve covered getting a handpay on free play before – something some don’t believe possible, but is certainly within the realm of possibilities.

Slotaholic managed to make it all happen in this video on Timber Wolf Diamond, starting with $100 in free play.

Josh decided to give the game $3.75 bets on the game, which works out to something like 25 spins on free play. The first bonus came quickly, with 15 free games but only about $20 won. The second bonus came around after some more spinning, but this time it was 178 games with a 4x multiplier.

These are the sorts of things that make this game special, but you still need the big symbols and additional wild multipliers to land and make the bonus really special.

The 24th spin brought the first spin with both the x3 and x5 coming out, and the next, much bigger win came thanks to Timber Wolf and the x3 multiplier just four spins later. In fact, that win alone pushed him into handpay territory. but with that many spins to go, he wasn’t done yet.

In fact, the total bonus yielded over 1,000x his bet, with a grant total of nearly $4,200. There’s nothing like taking $100 free play and converting it to 42x its original value!