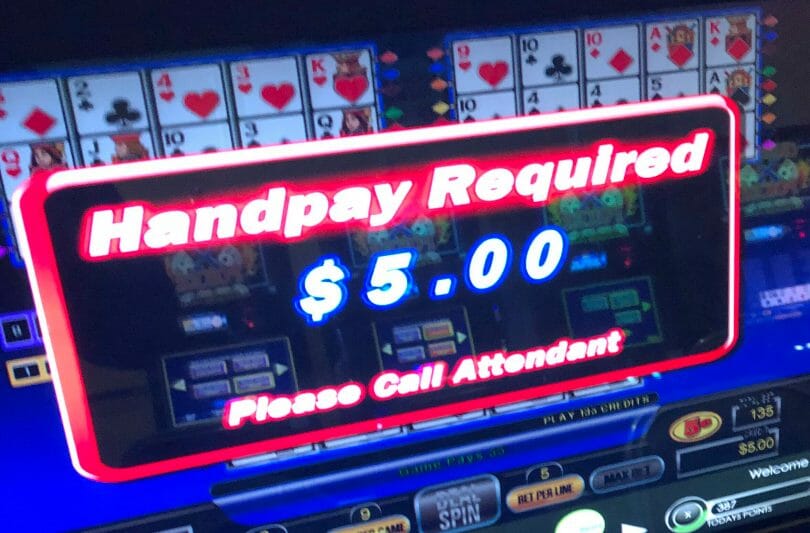 A handpay is traditionally a scenario where a prize won during a single wager on an electronic gaming machine, such as slots or video poker, that exceeds the limit that can be automatically paid by machine and requires paperwork before payment can be made.

Technically, the most complete definition is ANY condition where the machine can’t pay, including malfunctions or issues, such as the image at the top of the article. But for the purposes of this article we’ll focus on the classic scenario of a big win that must be reported.

In most cases the handpay number is decided by state and/or federal law – most often it’s because reporting of wins above a certain amount is required by law, generally for tax purposes, and must be reported during tax filing season.

In the United States, the standard number is $1,200, and it actually hasn’t changed in decades despite inflation and other considerations. There have been attempts over the years to both raise and lower the handpay number, so far without success.

While the US federal government has its own number, it can vary by market. For instance, New York racinos are governed by New York Lottery rules, and that means a lower reporting number. It tends to follow the scratch-off regulations that require a recorded win when you reach $600. In that case, you get a special prize voucher that you have to redeem at the cashier booth after confirming some basic personal information.

The term handpay itself may become outmoded soon, as many casinos are rolling out Self Pay or Fast Pay options, which effectively mean you’ve pre-filed the information required to get paid in advance with the casino. The casino will roll up all handpays from a given day and provide one paper per day, instead of having to get one per handpay.

This can make for easier paperwork at the end of the year, and also means within a few seconds you can confirm the handpay and get back to gambling (I’m sure the casinos enjoy that benefit as well, aside from the staffing considerations.)