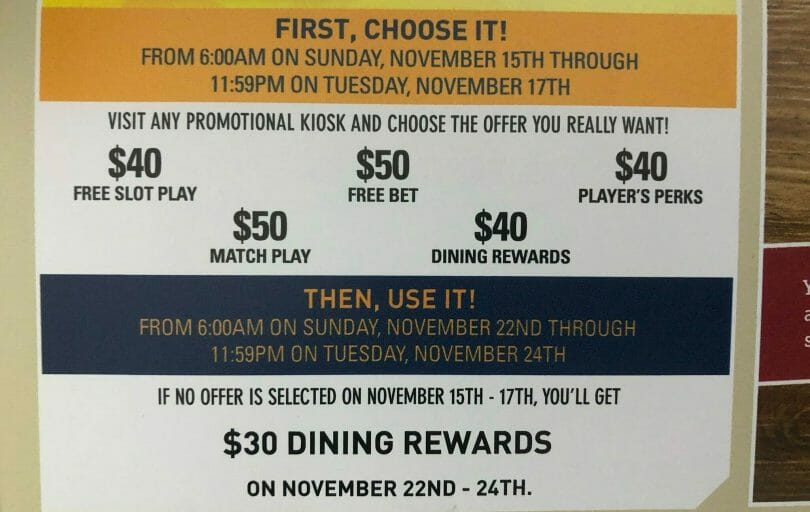 I’ve been getting a lot more play in at Mohegan Sun in Connecticut recently, and as part of that I’ve been getting reacclimated with their comp program. One thing that’s clear to me is there’s just a lot of moving parts, so understanding the total value requires a pretty deep understanding of what’s going on,

There’s additional value unlocked through the higher tiers that may not be obvious upfront. And they offer comps in various buckets that sometimes overlap, or have weird choices that don’t always make sense.

So let’s look at the core comp items, and then some additional considerations around comps that can come into play. All of these definitions cover the main Mohegan Sun campus in Connecticut, but as they manage other properties with a similar Momentum program elsewhere, there’s going to be overlap.

Let’s start with the most basic. Momentum Dollars are earned as you gamble. They earn at a different pace than tier points, and if you’re a higher tier level, they do accumulate faster. They’re your standard comp dollars, able to be used to spend on property. There are other ways to earn Momentum Dollars, but that’s the primary way.

They also let you spend them at sister properties Resorts in Atlantic City, Ilani in Washington and Mohegan Sun Pocono in Pennsylvania. It’s expected they will also be redeemable in Las Vegas at the Mohegan Sun Casino opening at Virgin Hotel in January, which they’ll be managing.

This is their free play term, and it’s as it sounds – it’s as good as cash in a slot machine, and once wagered through once, whatever you’ve earned is yours to keep.

Free play is most frequently earned as an upfront or front-end comp, as sent to players via mailers, but it can sometimes be given away during tournaments, drawings or kiosk games. You can also get free play as you earn slot tier credits, as we’ll discuss shortly.

Another form of front-end comp, these are dollars focused on eating at various on-site restaurants and establishments. Unlike Momentum Dollars, which can survive for awhile, Dining Dollars usually have a short-term expiration date.

Confusingly, Mohegan Sun also offers Players Perks, another form of comp dollar, but this can be used not only at restaurants and other eating establishments, but at shopping establishments as well.

Similar to Dining Dollars, they tend to have a short-term expiration date, like any other casino upfront offer, and both tend to be available on days when free play is not available.

This is a table offer that allows you to place a bet without requiring any wagering of actual cash. If you win, you get the value of the free bet awarded as your payout, and they can only be used on even money wagers, such as Blackjack, 2:1 bets like even/odd and red/black on Roulette, and the pass line on Craps.

Match Play requires you to put up some of your own money along with the voucher, but you win 2x back on the same even money wagers. So if you have a $25 match play, you wager $25 plus the voucher, but win $50 if your wager is successful.

Now that we’ve covered the core comp types, there are a few additional ways they can be earned beyond standard front-end comps. One way is through Achievement Awards, a unique aspect to Mohegan Sun’s comp program. There are two ways these can be earned.

Mohegan Sun assigned each player a daily achievement goal, which tends to be a stretch goal based on previous play. If you reach the achievement goal, you can choose from your choice of Free Slot Play or Momentum Dollars.

When I’ve received these in the past, they’ve generally been at the $25 level; I don’t know if as your number increases whether the reward does as well.

Reaching increments such as 250 tier points, 500, 750, etc. also earn you a tier achievement award. Most (usually the $25 awards) also let you choose between Momentum Dollars and Free Slot Play, but some of the bigger milestones like 1,000 points give you a $100 award that give you more choices such as a Mohegan Sun gift card, Free Bets or Match Play. Or you can even choose $50 cash.

These are guaranteed milestones built into the tier program, so if you achieve it you automatically qualify and can redeem on the promotional kiosks.

This was an aspect I only partially understood when I first was playing more at Mohegan Sun a few years ago. Choice Credits become available starting at the Ignite level (second level), but really gain value at the Leap level (third level). You earn choice credits monthly based on your level:

When buffets are open, you can gain entry for between 15 and 25 Choice Credits per visit, depending on which meal (breakfast is less, dinner is more). Lounge access is available between 10 and 15 credits per person, based on status and how busy it is (in normal times there are multiple lounges available).

You cannot combine Choice Credits with another form of payment, but they basically become additional guaranteed comp value attached to your tier, every single month.