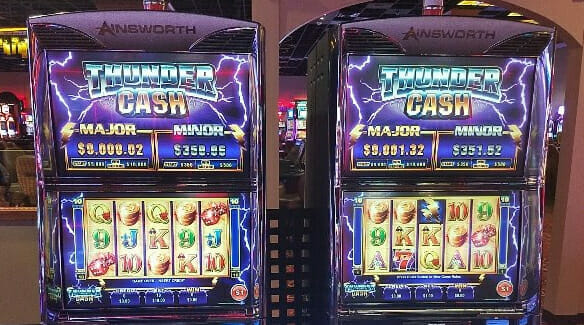 Thunder Cash is a classic Ainsworth game, and the game that first drew my attention to the company’s games. It’s a pretty standard game, all things considered, but the bonus has such potential thanks to its sticky wilds.

The slot reels are a 5×3 reel set with various numbers of lines depending on the version being played. As the game is traditionally a higher denomination game, it’s not unusual to see it in a 5, 10 or 20 line format. I saw the game in pennies at a 20 line format at Empire City Casino in New York as well, but that’s more the exception to the rule.

I have seen the game included in its multi-game systems (such as Multi Win 7) that let you use quarter, 50 cent or dollar denomination, at 5, 10 or 20 lines, so there’s a lot of variety in the game’s configuration, which is great for players of different budgets.

Lightning bolts are wild, and the Thunder Cash symbol is the bonus; collect three or more Thunder Cash symbols to trigger a bonus with 8 free spins. During the free spins, if a lightning bolt lands in any of the middle three reels, they will stick and remain in place for the bonus. Get enough of them and you can be guaranteed four of a kinds for the remaining spins of the bonus.

You can land three more bonus symbols and retrigger for a few extra spins, which given the wilds remain sticky, can get quite lucrative, so the bonus has tons of potential to pay well.

Many Ainsworth games have various plays on the wilds and the bonus rounds, but this one, simple and effective, is definitely one of my favorites.

Diana Evoni played Thunder Cash and got a handpay in this video:

Brian Christopher played Thunder Cash at the beginning of this video: