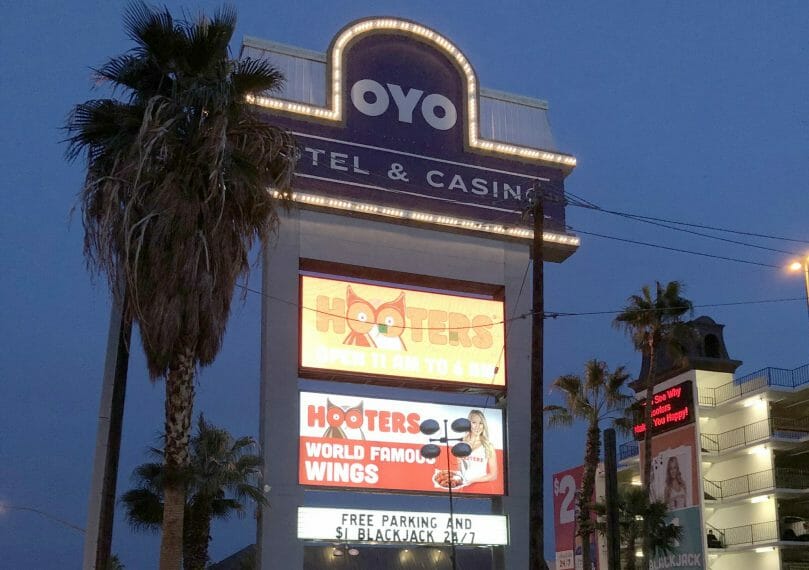 In a post I did on the site awhile back, I talked about point multipliers and their ability to amp up the rewards for playing at a casino on a given day.

During my recent Las Vegas trip, I decided to put it to the test and see the outcome. I had an offer for Oyo Hotel & Casino Las Vegas (the former Hooters Casino Hotel), and decided to check it out and see how it would go.

During their Wednesday promotion, on qualifying slots (video poker and giant progressive machines are excluded), you get 10x the points. So that same $150 in coin-in now gets you $10 in comps or free play. If you presume a 10% hold on slots, that $150 in coin-in has an expected loss of $15, but $10 in free play is a good rebate, so I wanted to see in practice how that worked.

Another aspect of playing at Oyo is their kiosk game, which gives you swipes when you earn 20, 200, 400, 600 and 800 base points in a day. Each kiosk game play will generally earn you some sort of low level comp, including:

As you can see, this can quickly fill in the gap for some of the remainder of the expected loss. I got at least one of each of the above during my time in Vegas playing at Oyo. I saw another player get $50 in free play so there’s also the chance to get something more.

I ended up in the positive on the visit, playing Quick Spin predominantly as a great way to grind out the tier credits.

My friend and I had so much fun at Oyo we ended up going back the next week and did it all over again. I ended up with their Platinum card by earning 10,000 tier points during my time in Vegas, good for some solid discounts on property as well as guaranteed availability of rooms on weekdays. We also both left up on both visits thanks to the additional opportunity there.

It could of course swing into the negative, but when a casino gives you so much opportunity like this promotion does, it’s crazy not to take advantage of it and see if you can have a positive outcome.

For a small casino, I got a lot of value out of my play there and will likely take advantage of this again in the future. It’s worth checking out if you’re going to visit Las Vegas.