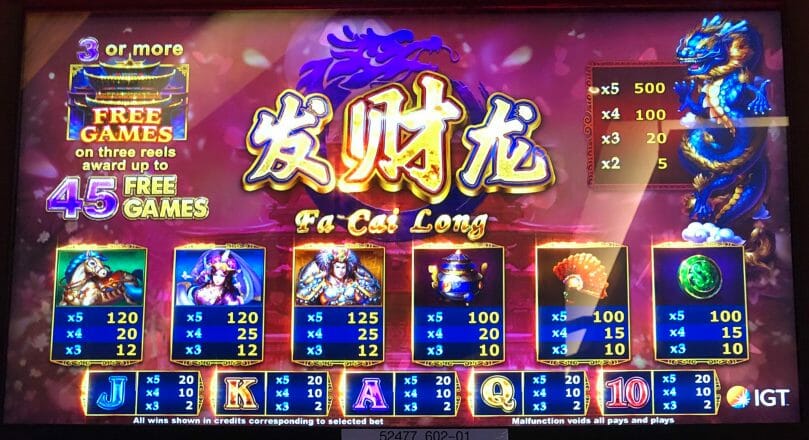 Game: Fa Cai Long
Manufacturer: IGT
Advantage play potential: Low
What Makes it Special: Get a reel of the same symbol (but only of the semi-premium symbols) and that reel will turn wild for the next spin.

Some of IGT’s earlier persistent state games have in more recent years seen clones come out with Asian themes. Fa Cai Long is an example of one, in this case serving as a clone of Icy Wilds. The game carries an earned wild on one spin to the next, but like Icy Wilds doesn’t offer all that much of an advantage.

When a full reel of any of the semi-premium symbols lands, a border appears around the reel, and on the next wagered spin at that bet level, that same reel will turn wild. You can do this on multiple reels, and the wild only appears for one spin.

One nice thing about the pay table is that the top symbol can pay anywhere as long as the symbol and/or a wild appears on any two connected reels on pay lines. So two adjacent wild reels can pay pretty well out of the gate.

If you find those lit up borders around one or more reels, you’ve got a single wager to get wilds with them. That’s the advantage. Given they don’t come down too often to begin with, and it’s only a single spin that you can enjoy them, I mark this one a low advantage. But you could find something that works out.