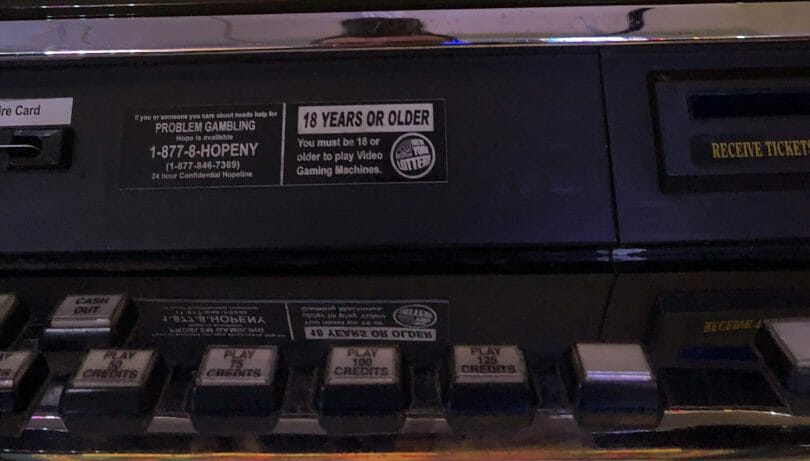 So far we’ve written about three other types of gaming machines that all look and feel like slots, but only one is actually slots:

The final machine type we’ll explore is most diverse because the jurisdiction is different than the others, and that is the Video Lottery Terminal (VLT). In some states, like New York, they refer to them as Video Gaming Machines (VGMs) but we’re basically talking the same thing here.

The VLT gets its ability to sanction games through the state lottery, and the state lottery therefore sets many of the rules regarding the games. As such, each state approaches things a little differently. Some states allow their lotteries to authorize such gaming; others don’t.

Some lotteries allow their games to run with a random number generator, like in Rhode Island, effectively making their games Class III in nature; others, like New York, don’t, having them operate therefore more like a Bingo or Historic Horse Racing machine where the outcome is determined outside the game.

As such, there is no one specific definition. But since the most common VLT is not a Class III gaming experience, we’ll focus on the type of gaming not covered, and seen in states like New York, where the VLTs communicate with a central server and their outcomes are pulled from there.

Such systems tend to operate more like a scratch-off or a pull tabs model – just like you buy a scratch-off from a pre-determined set of cards produced and there’s a set number of winners and losers, the same goes for VLT bets. A certain number of outcomes have been set up, and each bet you “buy” an outcome that comes from the central terminal, which could be a winner or a loser. Therefore, the payback comes from the fact that since all the possible outcomes are already decided before wagers are taken, they know exactly how much money will be taken in, and paid out, in a set of wagers that will be made.

So, similar to Bingo and Historic Horse Racing, the actual spinning and stopping of the reels are for entertainment only, and the actual outcome is coming from outside the machine.

In a way you are still competing with others in the facility as they’re also playing and hoping to get the winners and not the losers. But you’re not really competing against them anymore than you are when buying scratch-offs. If they take a lot of losing combinations, though, the number of remaining spins that are winners could be higher accordingly.

One outcome is the range of payouts tend to be more advantageous in terms of the legal requirements; for instance, in Delaware, games must pay between 87 and 95% (although a facility can get permission if they want to go higher than 95%). In New York, games must pay higher than 90 percent back; this is a big deal since many places set penny slots lower than 90 percent as a general rule.

Lotteries also report their payouts, so you can see how they pay out. And indeed you can see the outcomes of these laws when you examine state-run lottery VLT states like Delaware, New York and Rhode Island in the payback data collected by sites like American Casino Guide. All of the states and the sites listed within them offer paybacks above 90 percent as a whole, and in some cases in New York approach 94 percent, which is very high.

For awhile I lived not all that far from Empire City Casino, a racing with New York Lottery VGMs that was recently acquired by MGM. I did find my money generally lasted longer there and I had more winning trips; that is usually consistent with a higher payback model if proven over the long term.

A number of changes seem to be getting implemented as part of the takeover by MGM, including a heavy watering down of the freeplay model they used to offer, which could indicate the beginning of a change in payback there, but they still have to contend with the state minimums.

Have you played VLTs or VGMs before? Do you like them? Share our feedback in the comments below!