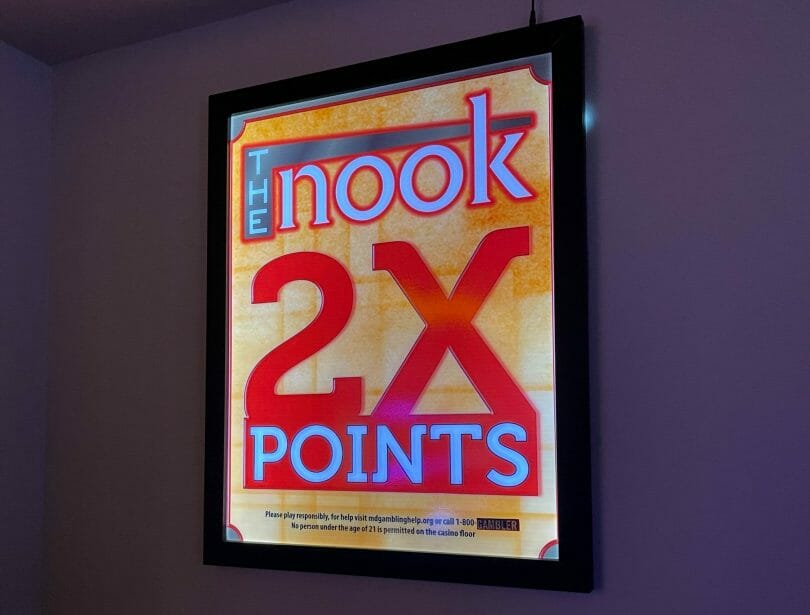 Periodically casinos will use slot machines or their general location within the casino to promote something that makes them stand out from other machines on the floor.

Commonly, some machines will serve as tournament machines, but there are a variety of other ways that actually can be favorable to the player.

Here are a few examples to help you understand what you can benefit from when you pay close attention.

Casinos will sometimes mark machines or banks with the game’s payback on it as a marketing tool. This information is not normally available so when you have it it can be beneficial as you know the overall opportunity can be higher.

One thing to watch for is it does not have “up to” before the percentage on the bank; that usually indicates only one of the machines has that higher payout. As players we will not know which ones.

This is one where I saw an example at Rocky Gap Casino in Maryland. They have a room called The Nook which is off the main casino floor and has Slot, Keno and Video Poker machines.

The Nook advertises 2x points for comps vs the rest of the casino floor, available anytime. Tier point earnings are the same.

The Video Poker appeared to have the same pay tables as put on the main floor, so there does not appear to be a payout penalty for the comp bonus.

My guess is since the space that houses The Nook is out of the way to some degree, that is how they bring it some attention and get play on the games inside it.

Some casinos use special players card system games to run promotions in the casino. You may need to play in a specific space to be eligible for the game.

It is that scenario that I have seen in a couple of casinos. The basic idea is play a certain amount of coin in inside the zone where the game is available, and you are able to spin the wheel for some free play.

It is usually a nominal amount, but it serves to be a bonus over what you earn by default. I first encountered this years ago at Isleta Casino near Albuquerque, and for awhile The Cosmopolitan of Las Vegas had something similar in a section of their slots.

The reasons for this may vary, but probably is similar to The Nook in encouraging players in an inexpensive way to play in a less popular area of the floor.