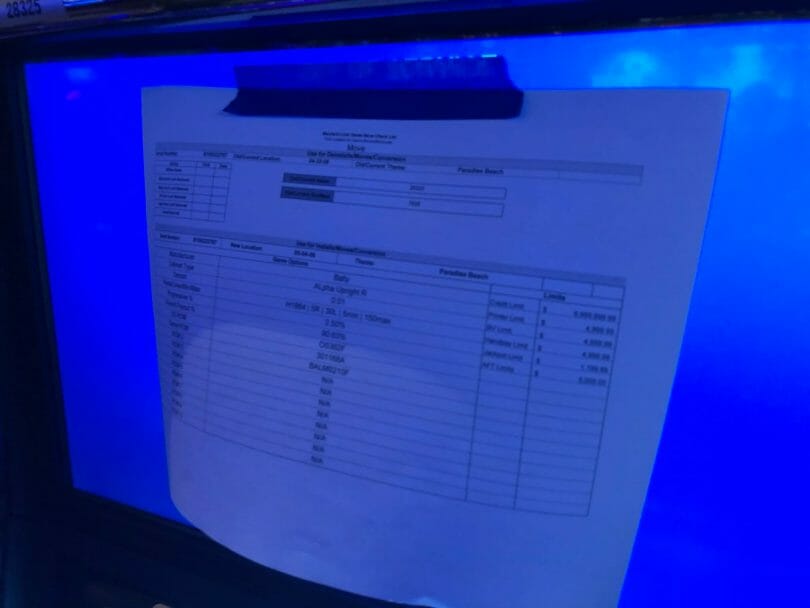 But occasionally, information can become available through a variety of normal business operations, which can help players get a sense of what’s going on there.

Periodically casinos will install new machines, and move around old ones, as they keep their slot floor up to date. The process usually takes a bit, as there can be dozens of machines on a casino floor, each of which need to be set up, configured and verified.

But that also means potential information for you as a player. Often times taped to each machine, in plain sight of everyone, is a paper with important information that needs to be verified for the machine. Some of it’s mundane – the game’s name, bet increments, denomination and so forth.

But in other cases it can be more interesting information such as the game’s payback percentage, or what percentage is contributed to the progressives, which are among the game’s configuration settings.

I was able to see just this at a casino I visited recently, with the information taped onto the paper. I did see a few things based on what was in that area being reworked:

The machines were not roped off, and you could walk right up and view these papers, which gave a bit of insight as to what to expect at this particular casino. If you happen across this sort of scenario, this information could help you decide that the older machines at this casino are a better bet, for instance, especially if you’re playing there enough over time, to get into that level of play where it will be statistically meaningful.