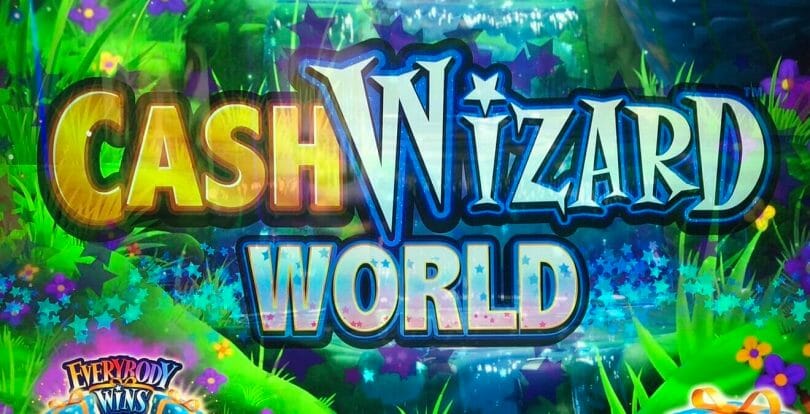 One of the newest slot machines to feature a community bonus is the latest game in the Cash Wizard series, Cash Wizard World. And in a quirk of the game’s design, you can win a community prize without wagering a single cent, under the right conditions, opening the door to an Advantage Play scenario, as long as you’re willing to sit around for a bit.

First, a bit about the bonus – each wagered spin, your credit bet is divided by 50, and that multiplier is added to a hidden persistent state for the machine, and is the same for all bet levels within a machine. As such, higher bets increase the multiplier faster (50 credits is 1x, 100 credits is 2x, and so on).

The Everybody Wins Community Bonus is triggered once every 3-9 minutes. If you have cash in the machine or are actively spinning, you will receive the bonus, which is 1-80 credits times whatever the accumulated multiplier is at the time it triggers. The machines that award a prize resets back to a 0 multiplier, the clock resets to a new time within that 3-9 minute range, and you continue on.

If a player cashes out of a machine before a Community Bonus is triggered, but after they’ve made wagers since the last community bonus, that accumulated multiplier within the machine sits tight until the next player comes along.

Since the rules do not require a wager to be placed, only money to be in the machine, the next player could collect whatever multiplier is accumulated on the next Community Bonus without placing a single wager. However, you’d have to sit on the machine for as long as 9 minutes to have the privilege of a bonus that is routinely in the dollars or tens of dollars, depending on the bet level.

Theoretically if a player is doing approximately 10 spins per minute, and it takes the full 9 minutes, you could have a multiplier in the mid-hundreds range, say around 500x, if you were doing a 250 credit bet per spin. So the top prize of 80 credits times 500 could be a 40,000 credit payout ($400 at pennies).

But realistically that 1-80 credit range is likely weighted heavily with values in a range that produces a much lower outcome most of the time. Free spin bonuses could also reduce the number of spins possible, and so on.

All that said, this is one of those rare, weird times where there could literally be free money on the table. However, once it’s played out, and the multiplier resets to 0, it won’t happen again, so remember if you do it to move on immediately after.

See Brian Christopher win an Everybody Wins Community Bonus award without having spun yet on this video, starting at 15:47: