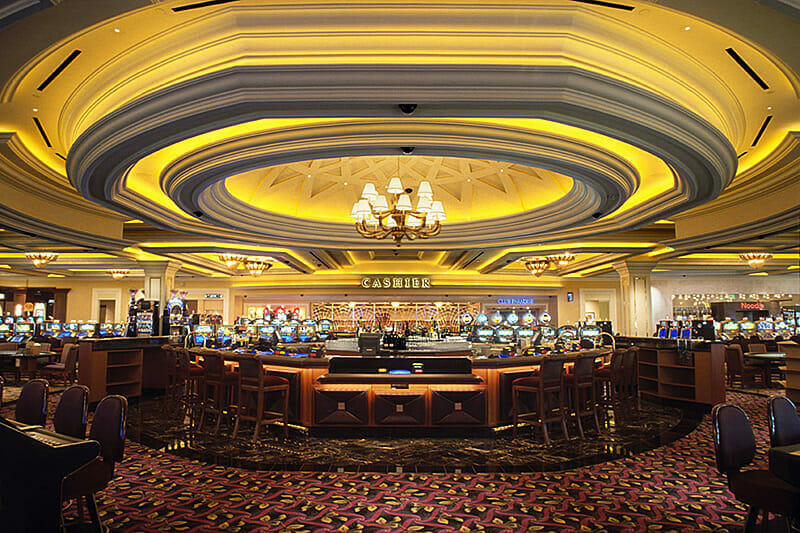 Agua Caliente Palm Springs is one of three casinos owned by the Agua Caliente Band of Cahuilla, and along with the Rancho Mirage location, which I wrote about recently, is one of the two more veteran properties.

That doesn’t mean it hasn’t been without investment – it’s continued to grow and evolve with time. And I enjoyed the mix of games here probably the most of the three properties, because of a few specific things that I saw.

This location doesn’t have a hotel – it used to, but closed in 2014 (having been built in the 1960s), and a proposed hotel to eventually replace it has yet to materialize – but it has a lot of things going for it otherwise, and is a good local casino for Palm Springs area players.

The gaming floor is a pretty simple rectangle, with plenty of old and new slots, mostly focused on the lower denomination varieties. I was impressed by some of the older school slots on the floor mixed in with newer ones – it’s always great to see that when it can be managed, given the games’ ages.

I rarely get to play some of the older Aristocrat games anymore in their original form, so it was fun to find so many of them.

Table games were not a big pit, but nonetheless they had a $3 Blackjack table (with even money Blackjack, it should be noted, but at those stakes should keep the game affordable for lower limit players) and $10 Blackjack with much more favorable rules. Those compared favorably to Rancho Mirage, where I had only seen $15, even on weeknights.

Video poker was not quite as favorable as what I found at Rancho Mirage, but I also didn’t see all that many machines in operation either. If you’re a VP fan, you may find Rancho Mirage to be more amenable, and it’s not all that far away.

They run regular promotions, just like at Rancho Mirage, for players to earn additional perks or gifts, so it helps to watch what each casino is up to at any given time.

They have a 24-hour Java Caliente Cafe with lots of entry level fare like sandwiches, hot foods and salads. They also have a Steakhouse location for those looking for a higher end eating option. Those two options cover both ends of the spectrum successfully, as even within those two the choices are pretty diverse.

They have a lounge off the casino floor with live music for those who want that sort of experience, but as things go overall this is a smaller scale property with a focus on gambling, which is just fine given its proximity to the core Palm Springs area.