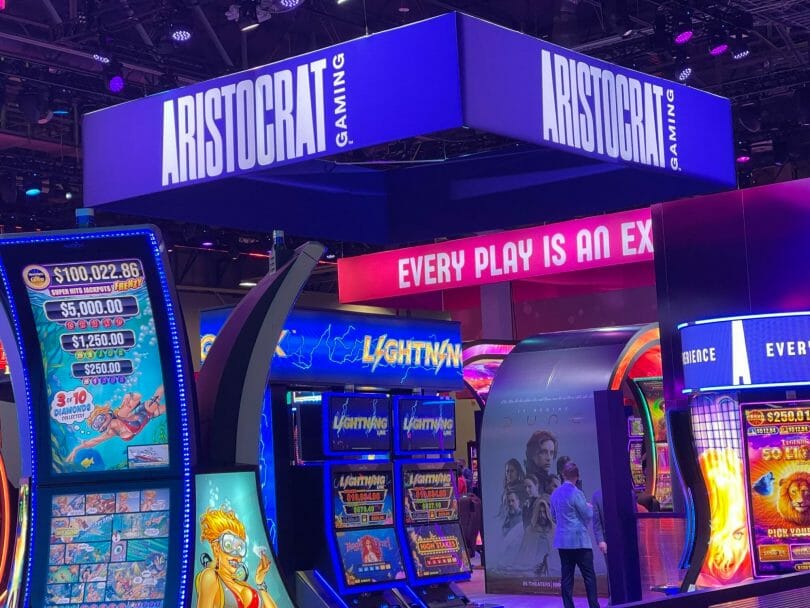 Aristocrat is a pretty savvy company in terms of leveraging popular brands and extending them (Buffalo, anyone?) so it shouldn’t be surprising that I saw a lot of that at their booth during G2E this year.

Fans of series like Buffalo, Gold Stacks 88 and Lightning Link will be happy to see some new things coming out, and they did seem to have some new ideas mixed in with the old.

The most direct sequel to Lightning Link yet, Lightning Dollar Link pulls in elements of Lightning Link, Dragon Link, Dollar Storm and Buffalo Link. The series launches with four themes, similar to other link series from Aristocrat.

The free games requires three symbols and the hold and spin still requires six, per the series’ nature. The expanded denomination stack seen on games like Dollar Storm and Buffalo Link return here.

The game also features escalating jackpots on escalating denominations, another hallmark of the series and expanded on more recent versions like Dollar Storm, with the addition of the Grand now scaling on the $5 denomination.

There is now a choice of lines on each denomination, such as 50 lines or 100 lines at penny denomination, which offers the choice between Lightning Link style line counts or Dollar Storm at that level.

There do seem to be new free game types for this series, that leverage from other Aristocrat games, such as mirrored reels 1-2 and 4-5, increasing the chance for line hits. retriggers or hold and spin bonuses.

Here is a video from RandomSlots:

Mr. Cashman is a series that has been brought back to life recently, with Mr. Cashman Bingo being another recent brand extension seen frequently on casino floors.

Aside from a fun way to change the art and Mr. Cashman character you wish to have on screen to play, the game features a 50 line, 75 credit setup.

The player can also purchase a feature, from x1 to x8 (it’s a $50 bet increment to purchase the feature). In the feature, each Cashman symbol reveals a credit prize. You can also land special characters, each of which are assigned their own upgrades. The upgrades include:

So it’s a different take on the hold and spin concept, but you can see how this is definitely a link game with the jackpots and progressives, so it falls into that line too.

Here’s RandomSlots’ video with Aristocrat and a walkthrough of the game:

Buffalo Instant Hit is one of the games they had on display, and one that’s already been making its way out onto casino floors.

The main advancement here is instead of getting paid for Buffalo line hits based on a pay table, instead you win the spaces the buffalo (or wilds) connected to the top screen.

Prizes understandably get bigger as you move farther across the screen, which makes sense since it gets harder to line up a five of a kind than a two of a kind.

Aside from credits on the top screen, there is a wheel bonus opportunity that can pay credits or a progressive.

Buffalo Ascension isn’t the first game by Aristocrat that features growing reels (Reel Climb Prosperity came out awhile ago), but in this case reaching the top triggers a special feature, such as Buffalo Stampede or Super Stampede, or free spins. If you get a free spins bonus, the reels stay their height for the bonus.

The game starts at 5×4 and the middle three reels have three spaces to grow. The bet panel shows what the reel height is at for each bet level. This game features 100 credit bet increments, as showcased at G2E.

Here’s a video from the Aristocrat booth by RandomSlots:

The Gold Stacks 88 series gets advanced with Gold Stacks 88 Empire, which features three bet levels (betting higher gets you better feature opportunities), similar to more/better bets on other games like the Unleashed series. That can push the bet to 138 credits a spin vs. 88 on a more traditional Gold Stacks 88 game.

Among the new additions is a wheel which can trigger free games, pay a progressive or offer a credit prize, further shaking up the format somewhat, since games and progressives were isolated to different features alone in the past.

I didn’t get much time to check out this game since others were all over it, but it should be a fun extension of the existing game series.

The Power of 88 Dragon

This game features a couple of interesting features. If you fill reel one with the mystery reveal symbol, your reels will grow, and it can do this in the base spin or free games. Once the reels have grown (which will happen at least twice), the reels will stop and reveal the mystery symbol.

The game also features an orb that, when landed, will trigger a dragon feature that will pay escalating prizes, like the red screens where each win is equal to or bigger than the last.

The Power of 88 Dragon Video

Once again, here’s RandomSlots with the video:

Big Fish Grand is Aristocrat’s attempt to break a bit out of the standard slot format of lining up symbols. Instead, a win zone is positioned each spin, and if something lands in the win space, you “catch and win” the prize that’s there. The win zone can expand and include credit prizes, wheels and progressives.

The wheel can offer free games, a Big Spin Bonus or a big progressive. The Big Spin Bonus removes the smallest paying fish and makes the win zone the entire reel set, upping the chances for a big payout.

The game also offers a Gamble feature, which exists on a lot of Aristocrat’s machines in Australia. In this case you get a heads or tails, 50/50 chance at doubling your prize.

Here’s another video from RandomSlots:

One of the games being showcased was Dune, which is the first time a slot was developed at the same time as a movie, vs. a licensed property that already has been out on the market.

Some of the features include the Sandworm, which goes up to the top of the screen and a single spin with reels featuring spice with prizes spins, and the prizes collect.

See video at the conclusion of this article with a bit more about Dune.

Fantini Research did a video with Aristocrat during the event: