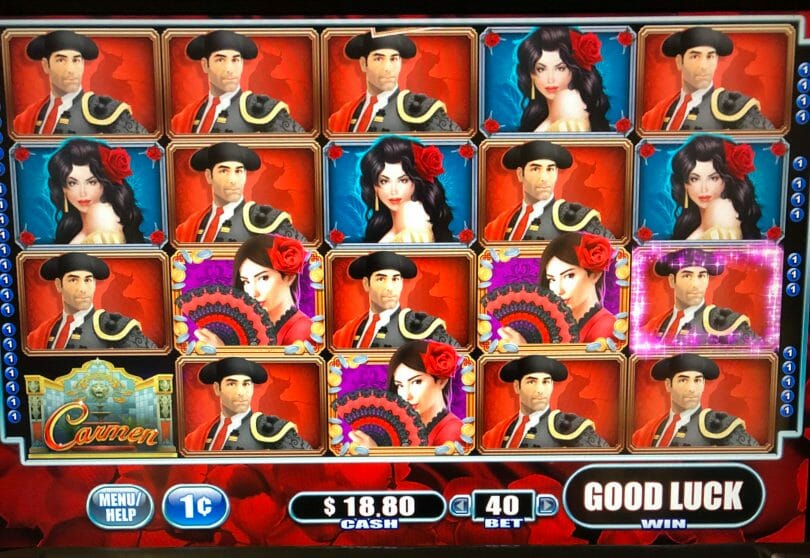 Carmen is a game I didn’t find in too many places, but was one of those games I couldn’t resist playing. As part of the WMS G+ Deluxe line, it could be a toughie, but it also could be quite generous when the right circumstances arose.

Its calling card was a 5th reel symbol that would lead to lower paying symbols being upgraded. It can do this upgrade multiple times (anywhere from 2-10, with 10 being a full reel set of wilds), and the more it does it, the more likely you’ll have a lot of high paying symbols among the various paylines. It pays out after the symbol improvements, so you get the best pays available for tha tpsin.

The free spins bonus would be triggered when the bonus symbol would appear on reels 1, 3 and 5. The game would then offer 12 free spins. The symbol upgrade would appear on reel 5, but each time it landed would only upgrade one symbol, with the upgrade taking place before pays are evaluated, just like in the base game.

Each missed opportunity to upgrade during the bonus would yield the symbol being more frequently present on reel 5, increasing the chances of it coming out, and it seemed to happen on average 4 times a bonus, and if it happened more, it was getting into the higher paying symbols by that point and got pretty good.

Because of the unique structure of this bonus, there’s no retriggers. But the potential is definitely there, especially when you can get the symbols upgraded enough.

The game also features music from the Carmen classical suites, which works quite well and livens up the proceedings quite nicely. It’s a fun game that should’ve been out there more, but is now becoming quite rare.

RandomSlots features the game and a free spins bonus, along with the pay tables:

Here is a bonus round from VegasLowRoller:

For an example of how the upgrade can work out, here is a player who got it to the second to last symbol, a very rare occurrence indeed: