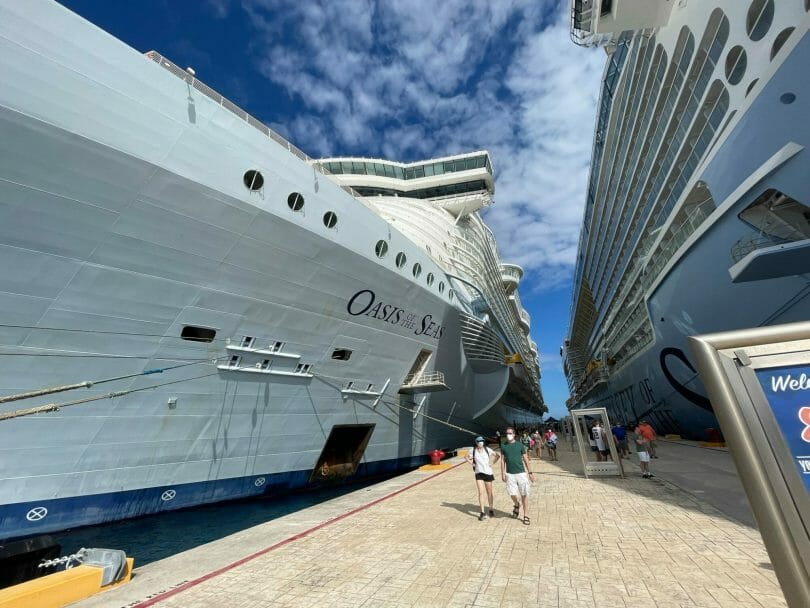 My recent cruise on Oasis of the Seas was the first time I had repeated sailing on the same ship, albeit a different itinerary. My first round on Oasis was in February 2020, just before all the shutdowns happened, so in some ways given the lengthy gap in cruising not a whole lot of time had passed since the previous trip.

That said, I did notice some changes between cruises on Oasis, as well as between my time on Freedom in August of 2021 and Oasis in 2022, that I made note of and wanted to note here.

I only noticed one specific bank of machines had been updated, a bank of Bally machines that previously had Dragon Spin and were updated to have Ultimate Fire Link. The machines were often full so that was a good move on their part, but it was interesting to see so few changes.

One bank of Dancing Drums and Double Blessings was still in place, but increased to 2 cent denomination, where another two sets of those machines on the other side of the casino remained at 1 cent.

I noticed that on the Dancing Drums and Double Blessings Machines, the Grand Jackpot was frozen at its starting position, instead of incrementing like it had in the past. This was particularly noticeable because Windy City Frenzy had hit a $17,000 Grand jackpot on Oasis during the 2020 cruise I was on.

To a player, that serves to slightly reduce the overall payback of a machine (although really the only player that takes the hit is the one who wins the Grand jackpot). Other machines, like Lightning Link and Ultimate Fire Link, didn’t seem to be affected.

On the Freedom, there was a $5+$1 Blackjack table, but the minimum on Oasis was $10, and some of those tables didn’t have side bets. What was consistent was it was a $15 minimum bet to get to 3:2 Blackjack payouts; below that was 6:5 payouts.

The $10 minimum held for games like Three Card Poker and Ultimate Texas Hold ‘Em as well.

I’ve seen various notes from players across Royal’s fleet that minimums can vary by sailing or ship, based on how busy things are, so I wouldn’t count on a given sailing necessarily being exactly as described here, but it was interesting to see the differences, and the casino on Oasis was quite busy at times.

That said, finding spots at Blackjack tables wasn’t really that difficult for the bulk of either of my most recent cruises.

Something I saw on both the 2020 and 2022 trips was the ticket redemption machines were out of service for the entire trip; I’m not sure why they’re there if they’re never going to be used, but so it goes. Taking those out could open up spots for a few more slots, but maybe that’s a future purpose they just haven’t gotten around to implementing.

This meant longer lines at times at the cashier if you wanted to simply redeem a ticket, but ultimately I wouldn’t bother until it was slower. I don’t remember them being on the Freedom, and both Oasis and Freedom were relatively recently Amplified ships, so I’m not sure the logic or thinking there.