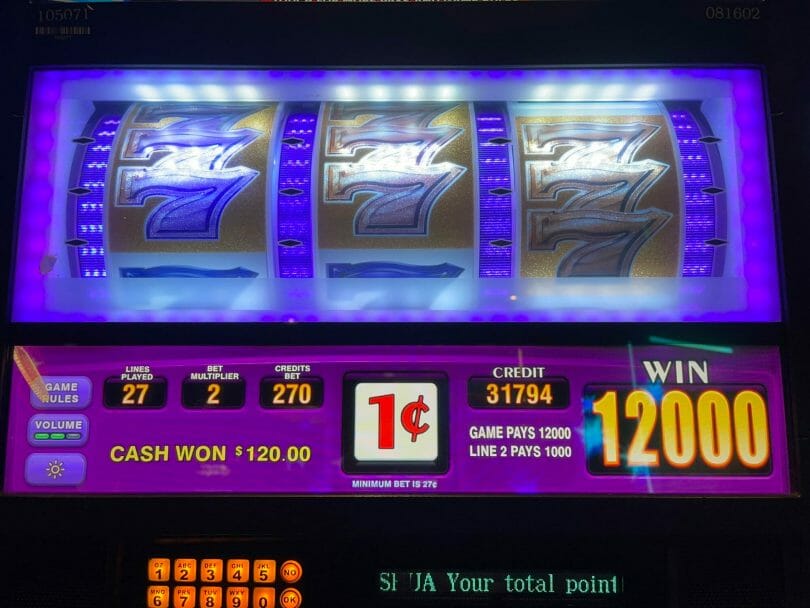 As I began getting more into mechanical reel slots, I began to realize I was missing out on certain types of games. One example was Gold Bar 7s (which has clones such Red Hot Tamales), an IGT mechanical reel game with a bit of an odd structure, but one that can be quite lucrative.

You can also up your bet multiplier, which updates the progressives based on the bet level, similar to other IGT games with such a format.

There’s no bonuses or other special features, just the line pays, so the pays do come pretty often, and if you line up 7s, particularly the same color 7s, the pays can be quite generous.

Because the game is 27 lines, it effectively works like an all ways pays game, as it’s 3x3x3 or 27 ways to pay. That’s helpful when paired with the stacks of 7s, which can yield significant pays.

And you can see two such examples of 7 out of 9 for $120 that I also got on the game. All three of these hit in relatively quick succession, building up my ticket quite nicely while I was killing some time before lunch on my final day there.

These games tend to be good for when you need a good coin-in machine, without a huge amount of volatility – the game pays well, but the pays come out in smaller doses quite frequently too, so you many times can get a good run out of them.

TheBigPayback has a quick video on the game with a near blackout: