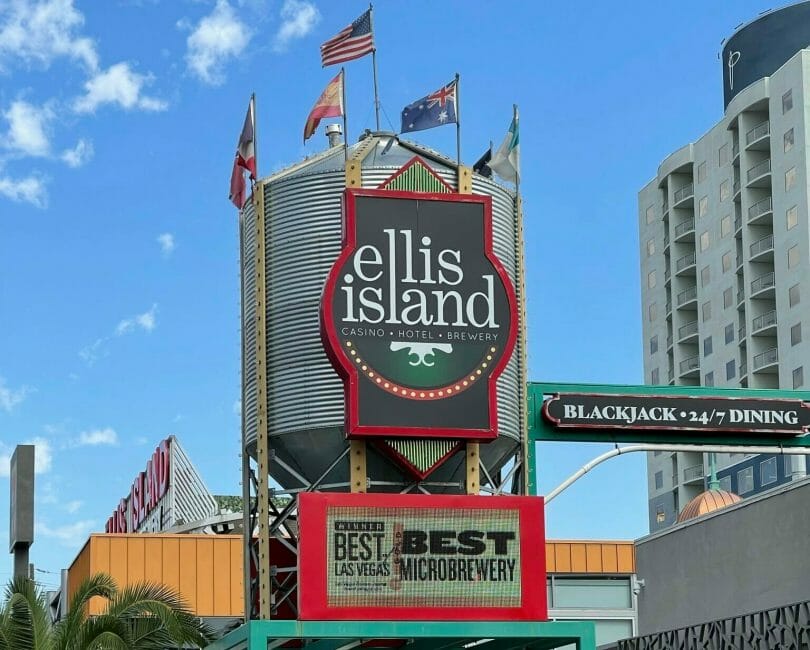 There are some casinos that come up regularly in conversations about options near the strip but not on it. Ellis Island is frequently one that comes up as being a particularly good value.

So as part of my latest trip to Las Vegas, I decided it was finally time to pay a visit to the casino and take advantage of some of its benefits. It lived up to the hype.

The casino floor is smaller than the one at Virgin Las Vegas, yet I was somehow less disappointed with it. There were games I see at most casinos that Virgin didn’t have, like Quick Spin, that they had at Ellis Island. Despite the smaller casino floor, there was still a good variety of games, and ample video poker/keno. They squeezed a lot of table games in.

Of course, I was just dropping in for a couple of hours, whereas the Mohegan Sun Casino was my home base for days. I also had much better luck overall at Ellis Island, so I’m sure that factors into things.

So there were a decent amount of newer games – not really many of the latest, but not surprising given the floor size. There were also a few banks of some of the classic IGT machines and so forth, which are always fun low-rolling options.

I found the video poker pay tables a bit surprising – on the machines I checked, a single hand quarters jacks or better was a Caesars level 7/5. But a 25-handed penny game, which works out to the exact same wager, had an 8/6 pay table with a bit extra on the straight flush. Another one with Double Super Times Pay on nickels was 8/5. So I’m not sure the logic, but this is definitely a place to check your machines.

The table games were limited in number but good from a player’s perspective. I was able to play $10 minimum 3/2 Blackjack, six deck shoe that was hand shuffled. They touted 24/7 $5 blackjack and roulette; I didn’t see them but presume it was the busier tables that I didn’t try to find my way into.

I did not stay at Ellis Island during the trip, but they do have a hotel and they’re touting newly renovated rooms. The hotel is on property and next door to the casino and restaurant spaces.

These aren’t high rise hotel buildings – you won’t be staying here for the views – but it is an option for those looking for modern amenities, with all the perks you’d hope for in a room, including a refrigerator.

Ellis Island’s Passport Players Club is just for Ellis Island, and like many properties that have a comp program just for themselves, it trends on the more generous side. For signing up, after playing just a few dollars in wagers, you get to go to the kiosk and play for free play.

You earn point multipliers on video poker (6x) and slots (10x) once you hit 500 base points in a day, which is $500 in coin-in. Certain video poker machines did not qualify for the multiplier; I can’t actually recall sitting down at one that did, but I presume they were in there. Given each point is worth a penny, getting 10 points per dollar wagered is like getting 10 percent cash back, which can be used for free play or comps. That’s very generous.

I also took advantage of coupons in the American Casino Guide and Las Vegas Advisor to get $10 in match play from each, and another chance at free play from each. I also got a couple of free play messages on the game above and beyond what I was expecting. All told, I ended up with $85 in free play and comp dollars for a single visit, which was helpful for momentum while there.

Another regular deal, one I had heard about often before in places like the Las Vegas Advisor, is that they have a steak special at the Village Pub & Cafe that’s $9.99 for cardholders, but after playing a few points, you can further reduce it to $7.99.

I took advantage of this offer and was surprised by the size of the meal. I got a choice of soup or salad, choice of potato and then my steak cooked how I wanted it. It came out quickly and fresh, and was the perfect meal for under $20 including tip.

While I was there they also had a pizza place open, with not much pizza out, but I don’t regret my decision at all. Bonus point goes to the person behind the counter who took my reservation and had a good quip, and then another one when I came back to sit down. I like people who can have fun with their job, and she certainly could!

One unique feature at Ellis Island is the relatively new addition The Front Yard, which has a covered but open air seating area with a couple of table games but mostly places to sit and watch a game on a giant screen. It was a nice touch and something that looked well structured to manage the very diverse climate that Las Vegas sees throughout the year.

Ellis Island is effectively a long block off the strip, behind Bally’s Las Vegas, and is walkable from there but probably not most other parts of the strip. Despite that, I highly recommend those who mostly have hit the strip or downtown to branch out and explore places like Ellis Island, both to shake up the routine and also to get some great value across the board.