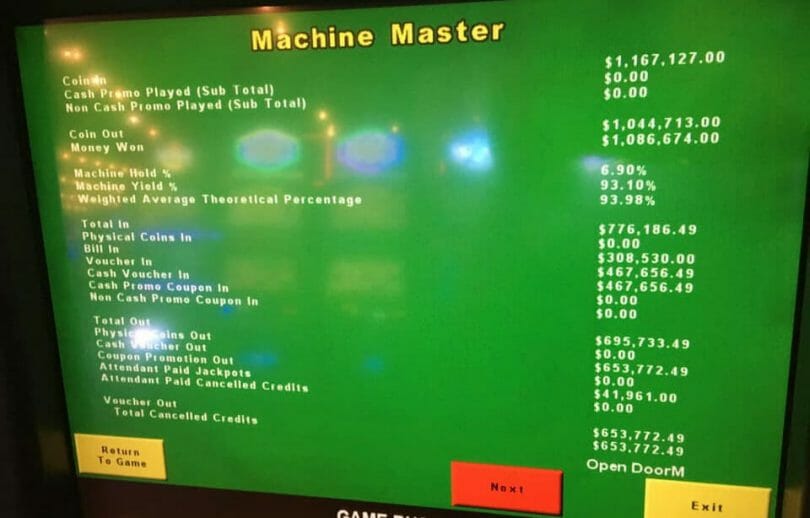 Many players think if a slot machine goes cold for awhile, or if its overall payout is below its long term expectation, then it’s due to hit.

I covered the concept of progressives and whether a machine will hit before, but overall payback is another one of those avenues that sometimes pops up. The conversation most recently popped up in a Facebook group of which I am a part.

As I’ve explained here, Vegas-style slots are governed by a random number generator. Over time, with millions of spins, a slot will be expected to come closer and closer to that long-term expectation of what it should pay (listed here as WATP). The machine doesn’t know the history of the previous spins nor changes the possible outcomes based on what it’s previously paid – that would violate gaming regulations in a number of markets.

The player, in this case, is getting it backwards. It isn’t going to pay a jackpot because the payback is below the long-term expectation; the payback is low because that jackpot hasn’t hit in awhile. Eventually it will, and it will be large enough to bring the payback in line with expectations. Jackpots are a meaningful portion of a machine’s payback, so it would be reasonable to assume if one hasn’t hit in awhile, and the payout has built and built, that’s a lot of unmet potential that’s waiting to even things out.

The player was also posting pictures of Must Hit By progressives, and so another thing is true in this scenario: The closer you are to the top value, the more likely it will naturally be to hit – there’s less steps to the finish line. So naturally these machines are a better bet to play vs. ones where the jackpot has recently been reset.

So my take is it’s a case of confirmation bias – they play machines that are good Advantage Play opportunities, they play machines with they see has this statistic, they hit a jackpot, so they must be right, right? But math (and slot machine programming) doesn’t work that way.

Of course, if it makes a player happy to be superstitious, I’m not one to try to burst one’s bubble. And if they’re making good decisions on machine choice by playing machines closer to a Must Hit By number, they’re making good selections in the end, even if the logic that got them there isn’t accurate.

But ultimately, the slot doesn’t know anything but you hit a button, the RNG number is looked up to an outcome, and the results of the spin is rendered. It doesn’t care what the machine has paid in the last 10, 1,000 or 1,000,000 spins.