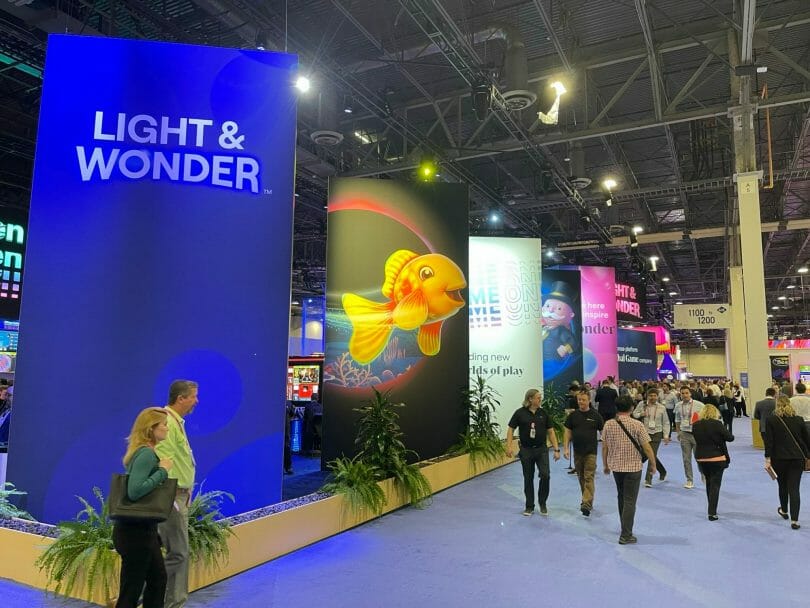 G2E is underway, and what a difference a year makes! While some things are quite similar to last year, there are already some notes from the floor with the expo floor now open, that I wanted to share as some of my initial thoughts come together.

This week I’m fortunate to be able to get some time with many of the major manufacturers to get an up-close look and walkthrough of some of their key games coming out. Like last year, I will converge my first-person coverage with clips from the various slot channels that are here filming right now (and there are quite a few). I’m more of a written word guy and they’re getting the good stuff on film already.

In the meantime, here’s what I’ve seen so far.

The Crowds are Enormous

It was very clear things were subdued last year. A portion of the expo floor was opened up for people to sit and dine in the center. That is not the case this year; every last inch of space has a purpose this time.

And the crowds are definitely much larger than last year; there were massive lines of people waiting to get checked in Tuesday morning (pro tip: many people can get their passes on Monday). The booths were quite packed, especially of the larger game makers.

Similar to how movie and TV producers have many times pushed into doing more sequels and brand extensions over time, as they build on the popularity of a brand and are considered less risky than starting from scratch, slot makers are increasingly doing the same.

Walking some of the major brand booths, I didn’t see anything particularly groundbreaking – there were lots of theme updates and extensions, which can be fun if you enjoyed a game in the past, but can limit the innovation because games stay within a preset box due to the previous games’ structures.

That said, I saw some more innovative things going on with some of the smaller game makers, and perhaps that’s the right balance – more slow and steady evolution by the bigger players, with more swing for the fences scenarios by the upstarts and so on.

About Those Online Games Coming to Casinos…

I wrote about game types that I wish physical casinos would borrow from online casinos and I was hoping to see more of that here this year. So far, I’ve seen exactly one, by Ainsworth, that really has me excited.

With the size of this year’s show, it’s very possible there’s more out there, and I plan on looking carefully for more of this, but it doesn’t look good.

But I spotted a new-ish game on the casino floor by IGT, Queenie, that turns out to be a game that is a new skin of an online game I’ve played on social casinos before, and really loved. There’s enough different there that makes the game quite fun, and I’ll have a full write-up on that later this week.

Congo Cash, another unique one, is also a port from the online and social gaming markets. I’ll have a write-up about that too.

So slowly, but surely, these games are finding a toehold in the casinos, and over time I suspect we’ll see more of this, it’s just a matter of when.

Is there something you want to know that I can ask at G2E? Leave your question in the comments and I’ll see what I can do!