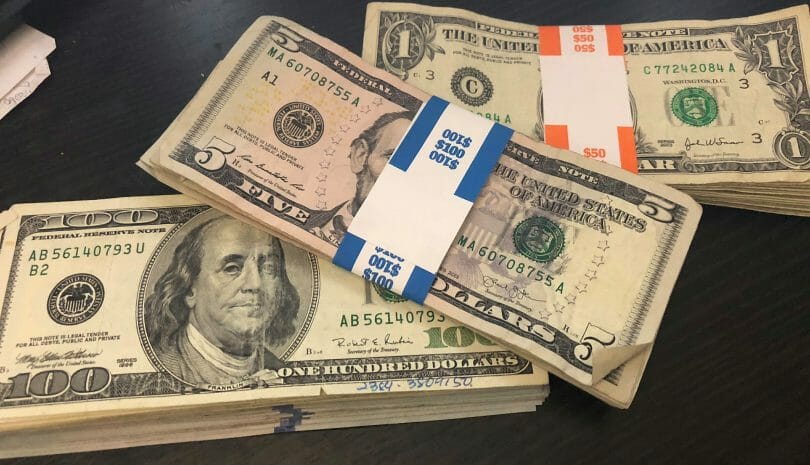 One of the topics that doesn’t always get a lot of attention when gambling, particularly around slots, is budgeting for a trip to the casino. You do see the topic of bankroll management come up a lot – what happens when you win, how do you avoid spending all your winnings back into the casino, etc. – but less of the conversation revolves around how much you need to begin with.

Like many things for slots, because of the opaqueness of the games themselves, it’s harder to be precise, but we can learn a few things from other casino games and carry best practices over to slots.

Why Risk of Ruin Matters

Before we dive in to all this, a quick understanding of why this matters. If you’re overbetting for your bankroll, or just underbankrolled generally, you’re running the risk a bad run can overtake your bankroll before you have a chance to get a big win or bonus to catch back up.

Short term variance can give the casino more of an edge than the basic math that ensures they get what they want in the long term. This is one of the reasons why they ideally want you to play for four hours if you’re winning – it takes some of that variance out. But if you lose quickly, you not only run out of money, but likely sacrifice comps because your coin-in is below what would be expected for a given amount of loss.

So, you don’t want to bet at a level that puts you out of commission too quickly. So making sure your bet size and bankroll are in decent harmony is helpful. So let’s now take a deeper look at how Risk of Ruin is calculated.

In other (non-slot) games, where the bets and outcomes are more clearly defined, some have taken the time to work the math and calculate a “risk of ruin,” which determines how much budget you’ll need to bring to minimize completely busting out. Why this is important is that gaming is inherently volatile – you can catch a lucky break and keep winning, or catch a losing streak that can eat your bankroll quickly. A risk of ruin calculation will give you a number that is designed to help you better ride out the ups and downs.

Video poker is an example of a game with a finite number of outcomes and known bet sizes and payouts. As such, some math can be done to calculate the risk of ruin based on n length of time playing. At the Wizard of Odds, they’ve calculated, for instance, how many betting units you would need to avoid fully bombing out over an infinite period of time.

One thing that’s interesting about this is they also calculate in cash back, which are the casino comp dollars we’ve talked about here in the past as being part of your payback. Video Poker Advantage Players consider that in their calculations and whether they think a given casino and paytable are worth putting time and money into playing.

(A betting unit is what the denomination is; if you’re playing a quarter machine, it’s a quarter. Many will play 5 quarters or units per hand to maximize the Royal Flush payout, and that is factored in to the calculation.)

Most players don’t play for an infinite period, of course, and some just want to know about a few hours of play. Four hours is generally the magic casino number for earning comps and getting recognized for play, so many use that as their barometer.

Another example where the outcomes can be predicted is Blackjack. Michael Shackleford also took a swing at those calculations, showing how many betting units you would need to last a set number of hands, considering certain Blackjack rules. As you can see by his charts, when you double the amount of hands (say, from 100 to 200), you don’t double the number of betting units. That’s because the variance decreases with more outcomes determined – you slowly approach the expected outcome.

So for video poker, if you’re playing a low variance game, the general advice is to bring a bankroll that’s 1/10 of the amount you expect to bet through (also known as your coin-in). You’ll bring a bit more for higher variance games.

Also remember Risk of Ruin means the odds of you not running out of money. You could be down to $1, down half your money, at break even, or caught a royal and be well up. The whole point of a Risk

Carrying This to Slot Machines

So now that we see how Risk of Ruin is calculated for video poker, we need to adapt our thinking for slots specifically. Things that are different in slots:

With all this in mind, we probably need to bankroll ourselves better than for video poker.

So here are things to think about when hoping to make your money last.

An average person will spin about anywhere between 6 and 15 times a minute (a spin every 10 seconds down to 4 seconds depending on the game, its pacing, if you’re stopping the reels quickly or letting them play out, etc.). That works out to 360 to 900 spins per hour. If you’re betting $1 a spin, that’s $360-$900 bet in. So that could be how much you lose. But the odds of EVERY spin for an hour being losing is nearly zero. Hence risk of ruin would not recommend a $900 budget per hour.

Most slots are programmed to take between 5 and 15% of your money over time. You’ll be closer to the 15% for penny slots, and likely in the 5% range for high denomination games. If you’re playing a penny machine, And betting $900 in bets, you’ll expect over time to lose an average of $135 an hour. But one hour you might be up; another way down. But you could also spin more slowly and only put $360 at risk. That’d be an estimated $48 loss on average, but again variability would be wide.

So how much should you bring? I see people all the time lament that they brought 100x their average bet and ran out of money too quickly. I think for slots to get good mileage you probably need 500-1000x your average bet to have a reasonable chance to go home with some money after a few hours of play. So if you’re betting 40 cents a spin, a $200 bankroll would be a good starting point. If you’re betting a $1-2 a spin, you’ll be more comfortable with $500 to $1000.

That doesn’t mean you have to go to a casino and play for four hours, or bring that much money to get your money’s worth. Remember, the risk of ruin calculation is just avoiding running out of money altogether in a given time window. Shorter windows, different bet sizes, different trip goals can all factor in to your budget. But if you find yourself running out of money a lot, it’s worth thinking about this more.