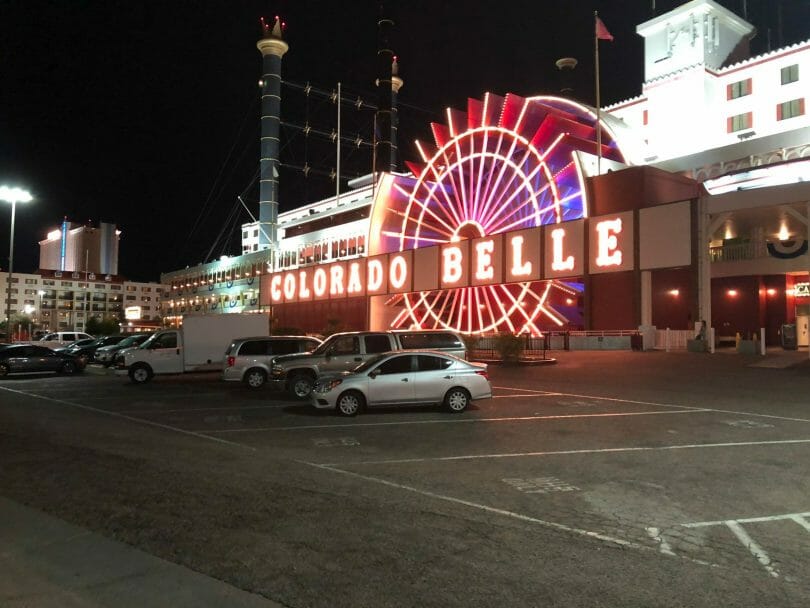 A friend of mine who I was traveling with proposed an outing during our planning of our end of year trip to Nevada last year – how about a night in Laughlin? He would have a rental car already, and it would give us an opportunity to pit stop at some other famous spots like the Hoover Dam. I was game, so on the calendar it went.

Because of the fact that I was working remotely during my trip, the best date we were able to make work was a Sunday night. As a Caesars Rewards player with history in other markets, I was able to obtain a comped room in Laughlin at Harrah’s, despite having never been there, a convenient part of being part of a national program. Plus, since my resort fees would be waived as a Diamond level player, it would be a truly comped night.

So, off we went! After making a quick stop at a Walgreens to pick up a few items (with the Dotty’s I visited next door), we got on the road. On our way out we got to see the Hoover Dam and Lake Mead, among a few other stops, before getting to Harrah’s Laughlin.

We ended up in a renovated room which looked to follow the basic design blueprint of the renovations seen in Las Vegas and Atlantic City, but done on a smaller budget. That said, the rooms were clean, if basic, and comfortable.

We ate at the buffet at the hotel, and it was by far one of the best buffet experiences I’ve ever had at a casino when it came down to service. The food was also good, but I can’t recall ever being at a buffet where each and every service interaction was a step beyond what I would expect, from paying for admission to those working the food stations to the service at the tables.

One such interaction would be notable, but I had nearly half a dozen. Whoever’s managing this buffet knows what they’re doing.

After gambling and eating at Harrah’s, we made our way over to Colorado Belle for a bit. Like some of the properties on the Laughlin strip, this was pretty heavily themed, and was pretty gorgeous on the inside. The red-heavy theme was quite beautifully lit, and although you could tell the property had seen some better days, it was still in pretty good shape.

We went back to the hotel and I managed to renew my Diamond through some pretty lucky play; my friend did equally well in Laughlin. We weren’t expecting such good runs given what we had read about Laughlin’s reported payback percentages, so we were pleasantly surprised.

in the morning we ate at Edgewater’s buffet before heading out, which was fine but nothing too exciting (although the pricing was just fine given what we got). The casino itself had windows overlooking the water, which was a nice touch.

On the way back we briefly stopped at a Terrible’s casino (where every machine played would be a handpay because they couldn’t print their own tickets), crossed briefly into California, drove by Primm, and stopped in Jean at the Seven Magic Mountains. For a roughly 24 hour cycle or so, it was a pretty packed set of experiences, but we got to do a lot.

Overall it was nice to have a night there. If I go back, I might be open to doing a slightly longer stay to have time to explore some of the other casinos, but I got a good amount of fun experiences out of the trip, and the gaming conditions I encountered were generally solid.