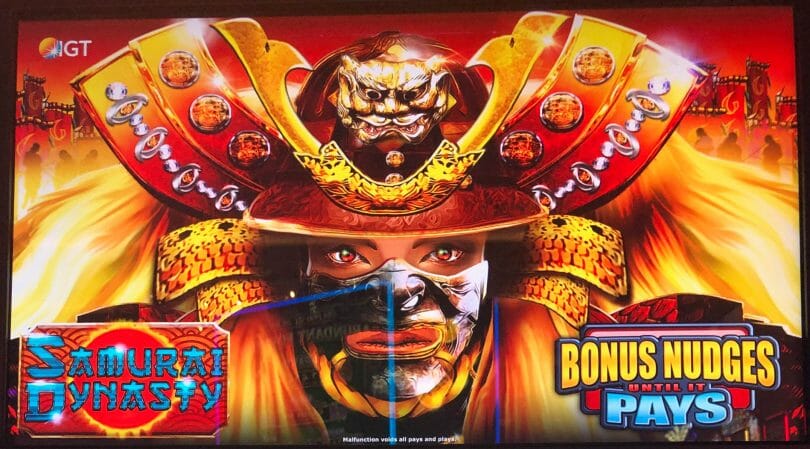 Game: Samurai Dynasty
Manufacturer: IGT
Advantage play potential: None
What Makes it Special: Bonus symbols are sticky and move one space down the reel per spin until they fall off. Three bonus symbols trigger a bonus.

IGT and some of the predecessor companies that are now part of IGT (such as GTECH and Spielo) have been among the most aggressive in designing persistent state reel games. I’ve been covering them here heavily since the site started.

In virtually all cases the presence of persistent state reels generally indicates an Advantage Play opportunity. But every once in awhile, they don’t.

Today I’m reviewing Samurai Dynasty, a game (coincidentally developed by GTECH/Spielo prior to the IGT acquisition) that uses persistent state reels around collecting Bonus symbols to trigger the bonus, a task that’s challenging enough (like many IGT games nowdays) to largely make any advantage infinitesimal, if one exists at all. But since the game is a bit unusual because of the mechanic, a full review may prove helpful to players.

The game is a 5×3 reel set with 50 cent bet increments. Persistent reel states are maintained at each bet level, like most IGT games with the feature.

The key persistent state feature on this game is the “Bonus Nudges ’til it Pays” feature. If you land a bonus symbol, it will hold in place and on the next spin slide down one space on the reel. If it’s at the bottom of the reel, on the next spin it will slide off the reel.

The game is a bit tough, but the line hits are solid so you can get some good 10-20x hits off random line hits with enough frequency to make the game interesting. Good line pays help out when you get into the Free Spins bonus as well…

Three or more bonus symbols will trigger the Free Spins bonus. Bonus symbols work in a scatter scenario, given the “Bonus Nudges ’til it Pays” feature, so more than one in a given reel is fine.

The number of symbols you get will determine your free spin count:

You cannot retrigger in the bonus, and the bonus locking symbols go away after a bonus. But a key feature activates in the bonus which is the Sliding Wilds. If a wild lands, it locks, and duplicates one space down the next spin until it hits the bottom of the reel. All wilds stay locked until the end of the bonus. So getting a number of wilds at the top of the reels early on can be huge as within a couple of spins the reel will be a full wild reel.

The potential of the bonus is such that it isn’t that easy to trigger, which leads to the next question…

Theoretically the sticky bonus symbols would indicate one – you can take a set number of spins (since if they stick on the top reel they’re already around for two more spins) to see if you can successfully land the bonus.

In practice, these bonus symbols are few and far between – the odds of converting it are low and the bonus symbols don’t double as a wild or anything that might give it a more predictable advantage.

As such, despite the presence of a persistent state element in the Bonus symbol, I wouldn’t attempt it if you saw a bonus symbol sitting there. If you saw two bonus symbols sitting on screen with room to move down the reel, one or two spins will tell you if you get one, and maybe worth a hail mary attempt, but I’d put it at the very bottom of the list of things to shoot for at a casino if you’re seeking Advantage Play opportunities.

Here is RandomSlots reviewing the game when it first came out under the GTECH/Spielo banner, and includes a bonus:

Albert’s Slot Channel showcases some more bonuses, including a handpay: