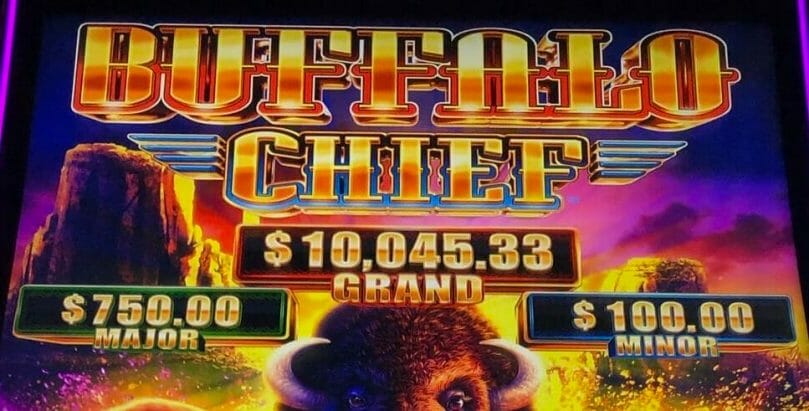 The slot machine Buffalo Chief has an additional accomplishment within its free games, similar to Buffalo Gold, where you can max out the additional buffalo heads for more frequent buffalo line hits. And in this case the added heads are part of a higher paying buffalo symbol that also pays scatter.

Collecting 10 of the special coins will yield the maximum of 250 white buffalo heads added, which can be lucrative when it lines up. Add to that the potential for a lot of retriggers, as is commonplace in the Buffalo series, and you can have a wild bonus really quickly.

That was the case with TheBigPayback, who played the game on a $2.50 bet. Tim started with a four symbol bonus trigger, all the special coins, and kicked things off with 100 added heads.

Right away he got a retrigger with two special coins, and as the bonus continued the retriggers continued, and the special coins continued to come out. At spin 22 he had 13 spins left and 180 of the heads, and was over 150x his bet.

At spin 35, he got the final two eagles coins, and still had 18 free games left thanks to additional retriggers. That set up the table for an epic run from there, with a lot of great line hits, including an epic one featuring 5 of a kind white buffalo heads with a multipliers, that led to a more than 1000x bonus, with 88 total free games, on a relatively small bet. This 15-minute video is all bonus and no filler.