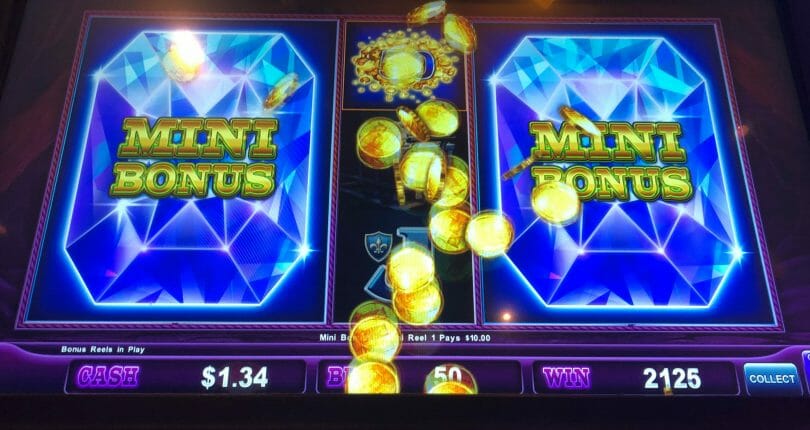 A growing number of games give you access to the potential for handpays through some of the top tier progressives. Many of the games with progressives feature at least two progressives, a big Grand or Mega jackpot that starts off worth thousands and grows, and a Major that can start anywhere from $800-$1,000 and quickly grow to handpay territory.

Of course, sometimes they keep growing. In the case of this recent video from Diana Evoni, a Eureka Reel Blast game had a major that had eclipsed $4,000, meaning it had not been hit in quite some time. Sometimes players like to pursue these prizes because the payoff can be enormous when it happens, and that’s what Diana did here.

She started with $300 in the machine plus her free play, and pursued $10 bets. She played for awhile, and got the bonus a bit more than five minutes in, landing nine dynamite symbols to start, a good beginning.

With games like Eureka Reel Blast, the more adjacent dynamite that you get together into rectangle shapes, the bigger a spinner you get. Getting 10 or more in a rectangle shape yields a large enough spinner that gives you eligibility for the Major. Once you trigger the bonus, you get give spins to fill in as many gaps as you can.

When the reel finally came to a stop, the Major came into view, and she managed to land it! A 425x win was the result.

It’s always important to pick machines that have the best progressives, when you are going to play progressive games. In this way, if you do manage to hit one of those big progressives, you can win the bigger amount. The odds of winning don’t change if you’re betting the same amount on each game; you just have a better prize to go for.