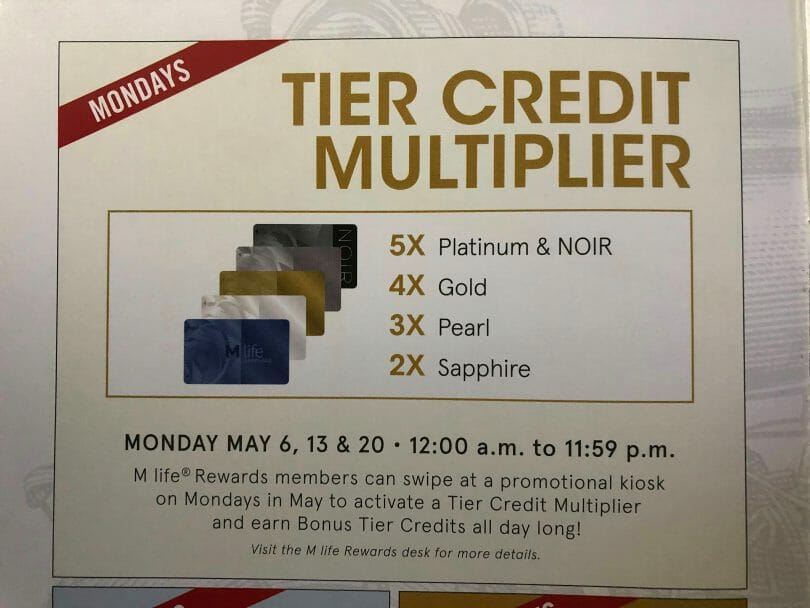 I’ve recently noticed a growing amount of frustration from players over a variety of scenarios that make tier status upgrades possible, such as tier matching and point multiplier days. In some ways you can understand it – more people with status means busier lounges, longer dedicated lines and so on.

I have vivid memories of multiple times taking longer to get help while waiting in the Diamond line than others had in the regular line at a few Caesars properties, yet the reps guiding people insisting I use the Diamond line for better service (I didn’t notice anything in terms of better rooms or such for those waits). So I certainly get the argument.

But these offers ignore the other trend that is happening, one where casino companies are making it hard to earn tier credits. MGM Rewards redid their program, lowering tier earnings, back in February, while Caesars Rewards has been rolling out changes to certain machines that earn at a lower rate.

Point multipliers, in effect, help counteract some of these changes. For casino companies, point multipliers also encourage players to play more. It’s the casino company equivalent of a Bed Bath & Beyond coupon – some won’t play unless they have that coupon in place, regardless of whether it’s actually a better deal.

JCPenney, a company that was dependent on a sales and coupon model, attempted to eliminate both in favor of everyday low pricing. Their attempt was made 10 years ago, was reverted quickly when it proved to be a failure, and they’ve been struggling ever since. It seems people love a deal.

Casino companies are catching on to this, and giving players what they want. MGM has been running a 2x tier multiplier in Vegas virtually since the program changed over, with minimal pauses. Caesars has done national 5x multipliers periodically, but now more consistent multipliers are happening in certain markets.

I recently received an email that Laughlin properties are offering a 3x multiplier for the entire month of October, and from what I’m seeing online so are Reno and Lake Tahoe. Having access to a multiplier for an entire month is definitely helpful in getting tier credits accumulated for higher tiers, especially when you can still qualify for the daily bonuses based on tier credits earned:

Those players who don’t like the tier credit multipliers will gripe that it’s watering down status from those who aren’t playing, but that 5,000 tier credits is still $25,000 coin-in on slots or $50,000 on video poker at a minimum, since some machines will award points at a slower rate, and therein lies the rub.

If a player is doing that sort of coin-in on a visit, the casino companies are likely going to be quite happy with that. And if a player is happy to concentrate play during such a promo, they’ll get what they want out of it too.

So while I’ve always advised that players should go when there’s a multiplier in effect, it’s now even more important given some of the changes these companies are making to programs to make it harder to earn, while adding more concrete value, such as resort fee waivers, to the higher level tiers.