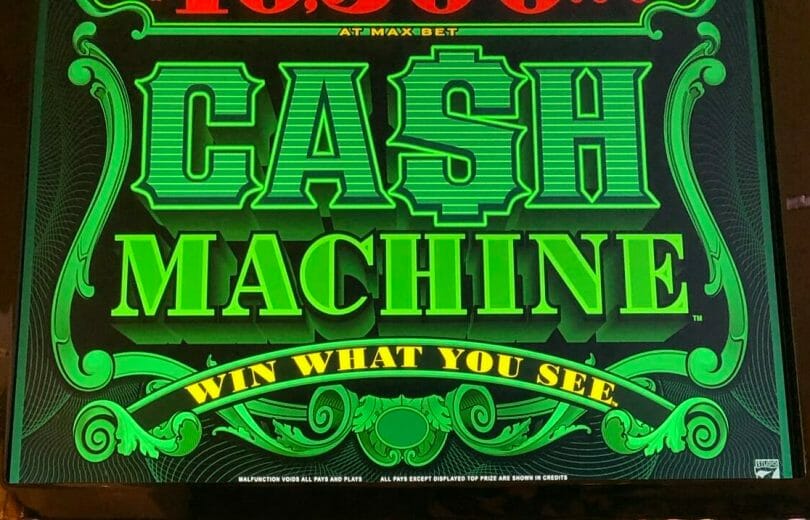 A game like Cash Machine is quite simple – you spin and whatever lines up, read it across and that’s your prize. With a top prize of 10,500 credits on a 10 credit bet, the top prize is about 1000x, which isn’t unusual for a higher denomination, three mechanical reel slot.

It does have a sufficient amount of volatility, like many higher denomination games, that it can be difficult to win the bigger prizes, although it does provide smaller wins to keep things going. But it’s certainly possible to drive out the bigger hits, as this video from Neily 777 shows, starting around 11:33 in the video:

This game frequently generates smaller wins, and Neily had not one, but two times where the reels went red, which guarantees at least one more number will drop. The second time, he started with a 2, and ended with 2, 0, 00 – $2,000. That’s a quite lovely 200x win on a game where the 100x and above wins don’t come out particularly often.

Neily therefore did a touch better than his hoped for double up, getting 20 times his original stake! And he did it pretty quickly, scoring it less than two minutes after he sat down. While every game session can’t go this way – slots have to make money for the casino in the long run – it shows you what is possible on a game like this.

Of course, Neily knew of the potential himself, because he’s had that exact hit before, although it landed in a different order, and took a bit longer the first time, as seen starting at about 4:17 in the video above. And if you search “Cash Machine” on his channel you’ll see a lot more wins like this.