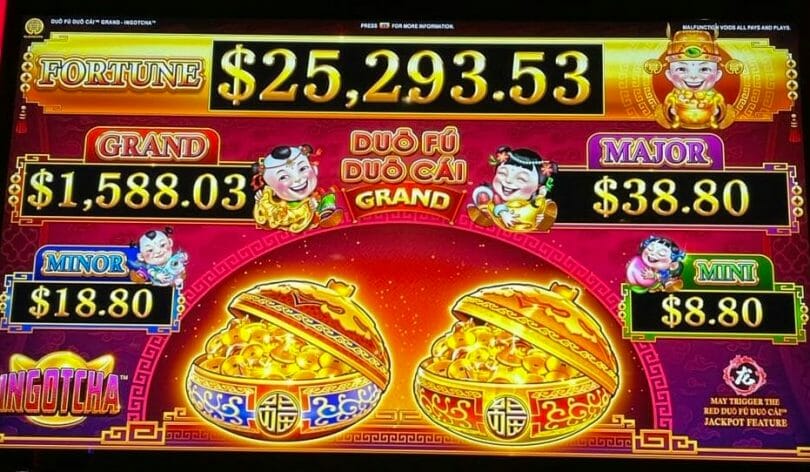 Hello again my friends… it’s been a couple of months since I’ve featured VegasLowRoller here in Slot Moments, and since that time he’s been doing all sorts of amazing things, breaking 200,000 subscribers and… winning the Grand. Again.

This time, it’s on Duo Fu Duo Cai Grand, a game that I need to get to writing up about from one of my recent trips. The game didn’t play nice with me at all, but I appear to be in the exception because I keep seeing great things from other friends on the game.

However, unlike many of the older Duo Fu Duo Cai games, this game has five jackpots, and the Grand is no longer the top jackpot. The new Fortune jackpot takes the $10,000 starting point, and three of the formerly progressives are now flat – the Mini, Minor and Major are all fixed prizes on this version, leaving just the Grand and Fortune as the progressives available.

The game offers the opportunity in certain cases (the Golden Jackpot bonus) to enhance the jackpot pick by either having a prize upgrade (which knocks the Mini out and replaces it with the Fortune Progressive as an option), or a double pick, which offers two jackpots as a reward. The Prize Upgrade was certainly helpful knocking out the $88 Mini but the Grand was certainly a lot better than the $188 Minor that he could have won.